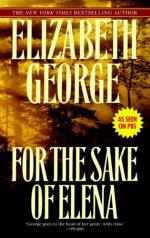 For the Sake of Elena Summary & Study Guide

Elizabeth George
This Study Guide consists of approximately 34 pages of chapter summaries, quotes, character analysis, themes, and more - everything you need to sharpen your knowledge of For the Sake of Elena.

For the Sake of Elena Summary & Study Guide Description

For the Sake of Elena Summary & Study Guide includes comprehensive information and analysis to help you understand the book. This study guide contains the following sections:

This detailed literature summary also contains Topics for Discussion and a Free Quiz on For the Sake of Elena by Elizabeth George.

Elena Weaver is a student at St. Stephen's College, one of the colleges belonging to prestigious Cambridge University. Elena is beautiful, lively, sexually precocious, and extremely troubled. Any number of men would have jumped at the chance to be involved with Elena, but only one of them could have killed her. Raised by her divorced mother, Glyn, Elena Weaver is the daughter of Professor Anthony Weaver, a well-respected history scholar and a don at Cambridge. After leaving his wife when Elena was just five years old, Anthony Weaver believes that Elena's arrival at Cambridge will give him a chance to make up for lost time. Weaver's second wife, Justine, is resentful of this newfound relationship with his daughter, but this proves to be a minor matter in light of their seemingly perfect ten-year marriage. At this point in his life, Anthony Weaver's main concern is winning back the love of the daughter he abandoned.

Suddenly, Elena Weaver is found dead. She was murdered. Detective Inspector Thomas "Tommy" Lynley, of New Scotland Yard, is assigned to the case. Along with his longtime partner, Sergeant Barbara Havers, Lynley is dispatched to Cambridge to solve the killing of Elena Weaver. Lynley is more than happy to oblige his superiors since he has another reason to visit Cambridge. Lady Helen Clyde, the woman Lynley has been in love with for some time, is in Cambridge and staying with her sister Penelope for a short while. Inspector Lynley hopes to rekindle his relationship with Helen, which went awry when Lady Helen refused his proposal of marriage.

Meanwhile, Sergeant Havers has problems of her own. Her elderly mother suffers from dementia and Havers is ill-equipped to care for her mother alone. After a string of disasters with hired caregivers, Havers now faces a difficult decision to either continue with things as they are or put her mother into a care facility.

The investigation into Elena Weaver's vicious murder seems to generate more questions than answers. On the grounds of prestigious Cambridge University, there are those who belong and those who do not. Conflicts within the local constabulary threaten to slow the investigation. More than one character harbors murderous intentions. Past hurts and resentments are played out and secrets abound among the illustrious faculty. Cambridge University, with its impressive architecture, its sprawling campuses, and its strained history with those living in town, becomes a place of suspicion, lies, and mayhem.

Amid all this, Inspector Lynley is faced with the task of unraveling a mystery while piecing together the complicated and often shocking personal life of Elena Weaver.