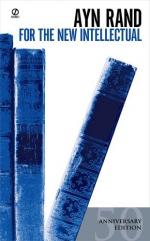 The final part of Chapter 5 is John Galt's one-hundred page speech which pronounces the philosophy of objectivism. Galt begins the speech by proclaiming that he loves his live and his values and sacrifices them for no man. He blames the people of the world for engaging in a practice of sacrificial virtues and accuses them of having sacrificed justice to mercy and happiness to duty.

Galt proclaims that he has stopped the battle of men against those they seek to destroy, the producers. He has stopped the motor and deprived them of man's mind. Galt discourages the people from trying to find them and says that his people refuse to serve them. They will not be sacrificed. And they do not need the people anyway.

The people of the world are morally corrupt, corrupt by mysticism and...