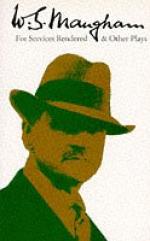 W. Somerset Maugham
This Study Guide consists of approximately 17 pages of chapter summaries, quotes, character analysis, themes, and more - everything you need to sharpen your knowledge of For Services Rendered.

Write a screenplay based on one act of the play. What problems would you face if you were to make a film version of the play?

Research the English class structure in the years following World War I. How difficult was it to move from the lower to the upper classes? Consider economic as well as social factors.

Investigate women's roles in England after the war. What kind of opportunities, if any, did they have outside the home?

Investigate the English government's treatment of veterans after World War I. What kind of support did they offer them?

More summaries and resources for teaching or studying For Services Rendered.

For Services Rendered from Gale. ©2005-2006 Thomson Gale, a part of the Thomson Corporation. All rights reserved.