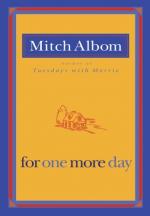 For One More Day Summary & Study Guide includes comprehensive information and analysis to help you understand the book. This study guide contains the following sections:

This detailed literature summary also contains Topics for Discussion and a Free Quiz on For One More Day by Mitch Albom.

This novel, at times poetic and at times sentimental, tells the story of a day in the death of Chick Benetto, ex-pro baseball player, ex-husband, and ex-father. A near-death experience in which he encounters the spirit of his dead mother is the catalyst of a journey into his troubled past, the narrative of that journey exploring the theme of relationships between parents and children, as well as loyalty and human fallibility.

For one more day begins with an introduction, in which an anonymous narrator describes the story about to be told as that of Chick Benetto, an elderly man encountered seemingly by chance at a small town baseball field. The story, the narrator writes, is to be told in Chick's own voice and from Chick's own perspective and is, in spite of some apparent impossibilities, to be believed by the reader.

Chick's narrative begins with a description of his attempted suicide, triggered by the arrival in the mail of a photograph of his daughter's wedding - a wedding to which he wasn't invited. As Chick describes it, the photograph represents the latest in a long string of personal failings and disappointments, and was also the final straw, leading him to decide to end his life. He prepares to kill himself, and then sets off on one last journey to the small California town where he grew up. As he nears the town he rolls his car in an attempt to avoid collision with a transport truck, but survives. He walks into town, climbs the same water tower he climbed as a child, and jumps off in another attempt to kill himself. He survives the fall and awakens to see his long dead mother standing over him.

Chick walks into town, disbelieving what's happening but at the same time desperately hopeful that what he saw was somehow real. He arrives at his childhood home, discovers that his mother is there, and sits down to the breakfast she prepares, still disbelieving but grateful for "one more day" with his mother (Posey). At first everything seems incredibly normal: Posey is as chatty as she always was, busy with friends as she always was, warmly dictatorial about his behavior as she always was. She's also, however, mysterious and cagey about how it's possible that she's even there.

Chick's narration of a series of visits between Posey and some of her friends/clients (she runs a door-to-door beautician service) intertwines with his recollections of his past, which focus on his increasingly desperate attempts to engage his father in an affectionate, open relationship. These attempts are, in turn, focused on baseball, which Chick's father wants him to play professionally. At the same time, Chick recalls how his mother wanted him to succeed at school, how things were often tense between his parents, how his mother eventually threw his father out of the family home and how Chick continued, even into adulthood, pursuing his father's dreams for him.

Chick's experiences with his mother are occasionally interrupted by strange, insistent shouts from a male voice, which nobody hears but him. As the narrative progresses, as Chick's experiences with Posey become stranger and his memories of his father become more intense, the shouts become more frequent. Everything climaxes when Posey takes Chick to visit his father's other wife, and Chick is brought back to the world of the living by a young ambulance attendant - the source of the voice heard throughout the novel. Chick, it seems, has been having a near death experience, through which he's learned some important truths about the relationships between parents and children - and specific truths about the relationship between his parents and him.

The novel concludes with an epilogue listing evidence that suggests Chick's story is true, that Chick died about five years after his near-death experience, and that the narrator is in fact Chick's long-estranged daughter Maria, whose narration seems to be an embodiment of one of the novel's key themes. The idea is that with love and compassion, any distant relationship between parent and child can be healthy.

For One More Day from BookRags. (c)2022 BookRags, Inc. All rights reserved.