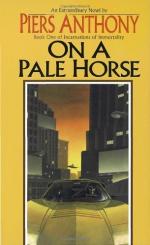 For Love of Evil Summary & Study Guide includes comprehensive information and analysis to help you understand the book. This study guide contains the following sections:

This detailed literature summary also contains Topics for Discussion and a Free Quiz on For Love of Evil by Piers Anthony.

For Love of Evil is a novel by Anthony Piers that details the descent of a wizard named Parry into evil. When the novel begins, Parry is the adopted son of a white Sorcerer, living in southern thirteenth century France. The Sorcerer raises Parry to use white magic to advance the goodness of God. Parry, at fifteen, marries a simple but pretty fourteen-year-old girl named Jolie, and the two fall in love. Two years later, the south of France is embroiled in heresy, and the king sends his soldiers to slaughter heretics. Parry, Jolie, and the Sorcerer are caught up in the maelstrom, and the Sorcerer and Jolie are killed.

Parry travels around, ultimately joining the Franciscans and later the Dominicans. As a monk and a member of the Church, he travels around to rule on cases needing Church input, such as wealthy landowners consorting with demons. Eventually, Lucifer becomes aware of Parry, and sends the exotic demoness Lilah to corrupt Parry, which she does. The two fall in love with each other, and Parry uses his magic to force Lucifer from his throne. Parry then becomes the Incarnation of Evil and the master of Hell. But Parry doesn't think all of the souls entering Hell should do so. Some are in Hell for stealing, though they stole only for the sake of feeding their hungry family.

When widespread war breaks out on the surface of the Earth in the 1900s, resulting in pointless killing, Parry goes to the Incarnation of War, Mars, to attempt to get him to stop the bloodshed. Mars refuses, so Parry goes to Chronos, the Incarnation of Time, to make sure the wars never happened. Parry then sends Lilah to corrupt the alternate Mars, but Mars turns Lilah against Parry. Parry also learns of a prophecy foretelling his downfall through an Irish girl named Niobe, whose daughter Orb, will become the Incarnation of Nature, Gaea. Parry then uses deceit to marry Gaea in order to combine their power, making his downfall impossible. Gaea then confesses that, despite the deceit, she does love Parry. Parry, though, cannot give up his throne, or else a brutal, bloodthirsty child rapist will assume power, so Gaea and Parry can never consummate their love.

For Love of Evil from BookRags. (c)2022 BookRags, Inc. All rights reserved.