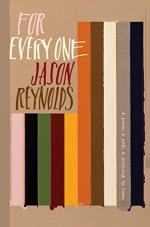 Related Topics
Ghost
All American Boys
Long Way Down
Stamped: Racism, Antiracism, and You
For Every One (poem)

For Every One Summary & Study Guide

Jason Reynolds
This Study Guide consists of approximately 25 pages of chapter summaries, quotes, character analysis, themes, and more - everything you need to sharpen your knowledge of For Every One.

For Every One Summary & Study Guide Description

For Every One Summary & Study Guide includes comprehensive information and analysis to help you understand the book. This study guide contains the following sections:

This detailed literature summary also contains Quotes and a Free Quiz on For Every One by Jason Reynolds.

The following version of this book was used to create this guide: Reynolds, Jason. For Every One. Atheneum/Caitlyn Dlouhy Books, 2018.

For Every One, by Jason Reynolds, was originally performed at the Kennedy Center for the unveiling of the Martin Luther King, Jr. Memorial there. Intended for young adults, the book is an extended poem encouraging readers to pursue their dreams. The book consists of a note from the author, followed by the poem, which is broken into four chapters. The book is dedicated to “You” and “Me,” the author. In the author’s note, Reynolds reflects on the finished work, which he created to help others, like him, who felt frustrated and unable to achieve their dreams.

In Chapter One, Reynolds addresses his reader as a “Dreamer.” He explains that, though this letter comes from love and his own experience, it does not come from expertise of any kind. Reynolds reflects on the expectations that he once had for himself, and notes that he not yet “made it” according to those standards. He nonetheless remains determined to achieve his goals.

In Chapters Two and Three, Reynolds describes the feeling of having a dream, and declares that everyone can have dreams, regardless of who they are or what they are interested in. Reynolds recalls trying to learn how to achieve his goals from books, all of which he eventually disregarded. He tells his readers to take risks on their dreams, and declares that his letter is for any and all people who are willing to take such risks. He now calls these people, called “dreamers” elsewhere in the chapter, “Jumpers.”

In Chapter Four, Reynolds describes his dream as a rabid beast that has infected him. He now trails it, hoping to find it again. Though he may never find it, for Reynolds the pursuit is the main point. Reynolds explains that dreams make a person unique, not necessarily great. Greatness resides in the pursuit of the dream, not the dream itself. Though he hopes that readers will appreciate his letter, he suggests that if they do not like it, that they burn it for warmth and light.

More summaries and resources for teaching or studying For Every One.

For Every One from BookRags. (c)2022 BookRags, Inc. All rights reserved.