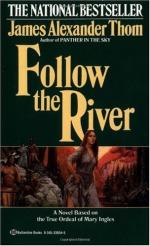 James Alexander Thom
This Study Guide consists of approximately 46 pages of chapter summaries, quotes, character analysis, themes, and more - everything you need to sharpen your knowledge of Follow the River.

This detailed literature summary also contains Topics for Discussion and a Free Quiz on Follow the River by James Alexander Thom.

Mary Draper Ingles was pregnant with her third child when Shawnee Indians attacked the small village where she lived, taking several hostages and killing the rest. Based on historical accounts of Mary's kidnapping and her trek to return to her husband, Follow the River is filled with descriptions of the lands as they likely appeared in those days and the people who lived there. The book begins Sunday, July 8, 1755, with Mary and her family going about their normal Sunday afternoon chores. The Indians attack, killing several men who were in the village at the time. When they find Mary's sister-in-law, Bettie Draper with her baby, they brutally kill the child. They then locate Mary's two sons who are picking berries with Mary's mother. They kill the old woman and take the boys, Mary, Bettie and one man from the village hostage. Mary's husband, Will, runs to the village but is out-manned and runs for his life back into the woods.

Mary has the child, a baby girl, on the trail to the Shawnee's camp. Fearing for her life and that of her daughter, Mary goes through childbirth without crying - a fact that impresses her captor, Chief Wildcat. The band of Indians travel westward for a month, and Mary tracks the days by tying a new knot in a length of yarn each morning. Along the way, the Indians have befriended Mary's sons, Georgie and Tommy. Mary sees the boys quickly turning to the Indians but is helpless to stop it. Once in the camp, most of the people are required to run the gauntlet. Indians formed a double line, and the captors ran through it while being struck by sticks and clubs. If the captors fell, they returned to the beginning. Bettie runs the gauntlet as does a Dutch woman taken by another Indian band. The woman, Gheta, becomes Mary's friend. Mary isn't required to run the gauntlet because of her bravery in childbirth.

Chief Wildcat wants Mary to accept him, but when she turns him down, he leaves without argument. Mary is sold to a French merchant doing business in the camp and spends her time sewing shirts for the Indians. Georgie and Tommy are taken by Wildcat. Another Indian woman, Otter Girl, has lost a child and takes over much of the care for Mary's own daughter.

On a trip away from the Indian camp to gather salt, Mary and Gheta escape. Mary leaves the baby behind in the care of Otter Girl, knowing that the child would likely cry and give them away or starve to death on the trail. Mary and Gheta escape, spending more than a month traveling back along the New River in an effort to reach Mary's home at Draper's Meadow. The two face starvation, the constant threat of discovery and the elements. As they near Mary's home, Gheta goes mad from hunger and threatens to eat Mary. Mary believes her to be serious and escapes by crossing the river. The next day, Mary sees Gheta on the opposite shore, and the older woman begs Mary to return.

Mary finds her way to one of the outermost dwellings of the region and is nursed back to health. Gheta is found a few days later and is taken to the nearby settlement. Mary and Will reunite, though each is concerned about the other's reaction. Will saw Mary being taken by the Indians, but ran away as he was outnumbered and unarmed. Mary felt that Will would never understand that she'd left their children. They do manage to work past their insecurities and have four more children together. They are later reunited with Tommy and come to believe that Georgie had died as a child. They never learned what became of their daughter. Bettie Draper is eventually ransomed from the Indian who adopted her.

More summaries and resources for teaching or studying Follow the River.