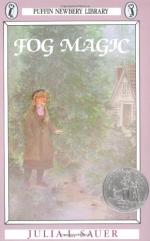 Julia L. Sauer
This Study Guide consists of approximately 29 pages of chapter summaries, quotes, character analysis, themes, and more - everything you need to sharpen your knowledge of Fog Magic.

This detailed literature summary also contains Topics for Discussion and a Free Quiz on Fog Magic by Julia L. Sauer.

The novel FOG MAGIC, by Julia L. Story, tells the story of young Greta and her love for the thick, gray fog that often settles on the little shipping village by the sea in which her family lives. Her mother, Gertrude, can never understand her daughter's love for the fog. Even as a baby, when the fog sets in Greta reacts with smiles and excitement. To keep her little toddler from running off into the fog, Gertrude literally ties Greta to the clothes line.

As Greta matures, her father, Walter, seems to have a deep understanding of Greta's fascination with the fog. Walter convinces his wife that Greta should be allowed to follow her heart and venture into the fog which excites and seems to lure her. Chasing Rosie, the family's runaway cow one evening, Greta spots in the thickening fog what seems to be the outline of a house. But she knows from her father's stories that there have been no houses on that side of the mountain for many years. Greta's curiosity gets the best of her and she returns to that spot, on the old Post Road, the next time there is a heavy fog. Just as before, she sees the house. This time, she also sees an old man working around the house. He waves at her, as though he is inviting her in. She steps into the spruce forest, feeling safe and protected by the very fog that others detest and dread. Every time the fog rolls in, Greta is eager to finish her chores so she can follow the curtain of fog.

As Greta ventures deeper and deeper into the forest, she encounters a woman dressed in a plum silk dress who is driving a horse and carriage. The woman tells her to come aboard. She drives her the rest of the way to the village of Blue Cove, a fishing community that had been abandoned years before. She had often spent time in the area, playing in the "cellar holes" which is all that is left of the homes. But as she advances toward the village now, she sees a barn and then a house and then other houses and stores emerging from the fog. A beautiful gray cat rubs up against her leg and runs ahead of her, leading her to the Morrill home. There Greta meets the Morrill family: Retha, a girl about her age and her parents, Laura and Eldred. In the months that follow, Greta grows very close to the people of Blue Cove, especially the Morrill family. She knows that the people, while loving and kind, belong to a different world than she does and that she is just a visitor.

Greta enjoys the time she spends in Blue Cove but she knows that the magic will not last forever. When Greta turns twelve, Laura Morrill gives her a kitten for a birthday present. When Laura bids her "safe passage" for the years ahead, she knows her time in Blue Cove has ended. Greta is happy with her life and the memories of Blue Cove but is satisfied to be heading toward her teens and leaving childhood fantasies behind her while vowing to never forget them.

More summaries and resources for teaching or studying Fog Magic.