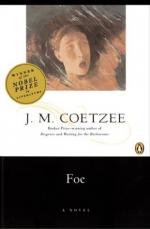 John Maxwell Coetzee
This Study Guide consists of approximately 28 pages of chapter summaries, quotes, character analysis, themes, and more - everything you need to sharpen your knowledge of Foe.

This detailed literature summary also contains Topics for Discussion and a Free Quiz on Foe by John Maxwell Coetzee.

As the story opens, a young woman admits she cannot row any farther, slips over the side of the boat and begins swimming. She makes it to the sands of an island where a black man appears. The woman, who is later identified as Susan Barton, tells the man that she is a "cast away," is alone, and needs water. The man is Friday and Susan has landed on the island of castaway Robinson Cruso.

Susan's life on the island is, by her account, dull and monotonous. Cruso spends most of his days with Friday working at building terraces though they have no seeds to plant once the ground is cleared and rock walls built. Susan soon falls into a deep depression and Cruso notes that some who find themselves castaways simply aren't cut out to endure. While Susan doesn't understand his toiling at the job she sees as a waste of time, Cruso is happy in his island paradise. Then Cruso comes down with a recurring fever. The first time, Susan nurses him back to health. The second bout comes after Susan has been on the island for more than a year and a ship lands on the beach just as she is wishing for medical help for Cruso. They head for civilization though Cruso dies on the way, leaving Susan feeling responsible for Friday.

In England, Susan comes to believe that selling her story to an author would be the best way out of financial difficulties and enters into an agreement with Daniel Foe. She soon discovers that Mr. Foe is on the run for his own financial problems and moves into his house, living largely off the meager produce from his garden. Then one day a young girl shows up, claiming to be Susan's daughter. Susan admits that her daughter was abducted but denies knowing this young girl, believing instead that the girl is Mr. Foe's daughter.

Susan and Friday travel to Bristol with Susan hoping to put Friday aboard a ship bound for Africa, but she finds she doesn't trust any of the captains willing to take him and keeps Friday with her after all. They then encounter Mr. Foe again and he introduces Susan to the girl who continues to claim she is Susan's daughter. Faced with the girl again, Susan begins to doubt that she herself is real. When Mr. Foe encourages Susan to take some time for herself, leaving Friday in Mr. Foe's care, she does so. When she returns, she see a sign proclaiming that Daniel Defoe, Author, lives in the home.

Susan enters the house and finds a young girl wrapped in an endless grey scarf, then a couple that resemble skeletons on the bed together and Friday, barely alive, in an alcove. She also finds a manuscript that crumbles in her fingers and upon reading the words, "And then I could row no further," slips over the side of the boat and into the water. This time she doesn't strike out to shore but sinks down, eventually encountering Friday.