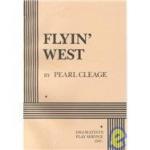 Why do you think Cleage chose Flyin' West as the title of this play, and do you think it is a good title? Explain your answer, and also suggest three other titles for the play.

as if you are a film critic comparing and contrasting Flagg's story and Flyin' West.