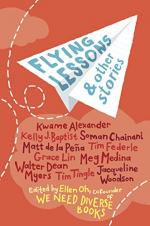 Oh, Ellen
This Study Guide consists of approximately 45 pages of chapter summaries, quotes, character analysis, themes, and more - everything you need to sharpen your knowledge of Flying Lessons & Other Stories.

“Seventy-Six Dollars and Forty-Nine Cents: A Story-In-Verse” by Kwame Alexander is written in the form of small poetic verses, each one with its own title, but all linear in telling the same story. As the narrator explains in the first poem, his English teacher has given his class the assignment of writing memoirs. The narrator expresses a desire to add “a little fiction” to his story (160).

He starts his memoir explaining that his name is Monk, named after the jazz musician Thelonious Monk. Nevertheless, his name has presented many opportunities for his classmates to mock him. At school, he explains, he “was uncool. Useless” and was obsessed with Star Wars (162). In particular, he struggles to talk to girls, though he has a crush on someone named Angel Carter.

The narrator flashes back to when his family was driving...

(read more from the Seventy-Six Dollars and Forty-Nine Cents: A Story-In-Verse Summary)

More summaries and resources for teaching or studying Flying Lessons & Other Stories.