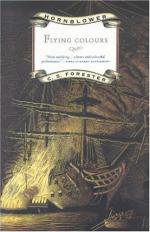 C. S. Forester
This Study Guide consists of approximately 45 pages of chapter summaries, quotes, character analysis, themes, and more - everything you need to sharpen your knowledge of Flying Colours.

This detailed literature summary also contains Topics for Discussion and a Free Quiz on Flying Colours by C. S. Forester.

Captain Horatio Hornblower languishes in a Spanish prison, captured after the loss of his 75-gun command Sutherland. Tried by a sham French court, he has been sentenced to death in absentia and is shortly transported to Paris, with Lieutenant William Bush and his coxswain Brown, for execution. On the trip the three men make a daring escape and are taken in by a local Count who sympathizes with their plight. They spend the winter months preparing for a spring escape and then take to the Loire River in a fishing boat. They descend the Loire, steal a cutter, and make their way to the fleet. Hornblower returns to England, where he is received with public adulation and much political acclaim.

The novel opens with Hornblower on land and in a Spanish prison, just hours after losing a four-to-one odds naval combat with a French squadron. His wrecked ship, Sutherland, lies foundering within sight and the portion of his crew which survived the battle are also imprisoned, including his steward, Polwheal, his coxswain, Brown and his trusted lieutenant William Bush. Bush has lost a foot in the combat and his survival is questionable. Within hours the remainder of the English squadron arrives and engages the crippled French squadron making short work of the ships—and also firing Sutherland in the process.

Hornblower, Bush and Brown are shortly are their way to Paris, where the two officers face execution on trumped-up prior charges of piracy. Bush becomes feverish but survives and then on a stormy night when the opportunity presents itself, Hornblower acts decisively, and the three men escape by rowboat down the Loire River. After capsizing in a rapid, they gain the shore and, freezing cold, seek shelter in a nearby residence a few miles from Nevers. There, they meet the Count Graçay and his beautiful, widowed, daughter-in-law, Marie. Fortunately for Hornblower, the Count is an English sympathizer and takes the men into hiding for a prolonged period of recuperation and preparation. Over the course of several months, Hornblower and the Count develop a close friendship whilst Hornblower and Marie pursue a sexual liaison.

When spring arrives, Hornblower, Bush and Brown leave the Count's house and proceed down the Loire River as far as Nantes. There, they don disguises as Dutch customs officials and in an audacious move steal a 10-gun cutter and sail it out of Nantes and into the English fleet. Having traveled some 750 miles by coach and boat through France, Hornblower has been absent for some five months, and he is received with stunned welcome. He learns that his wife has recently died in childbirth but also that Barbara, his love interest, is recently widowed. Hornblower returns to England where he is honorably acquitted of the loss of Sutherland and then realizes that he is something of a popular celebrity. Made a Knight of the Bath and endowed with a considerable amount of wealth, Hornblower is then reunited with an adoring Barbara and his infant son, Richard, and the novel ends on a most happy note.

More summaries and resources for teaching or studying Flying Colours.