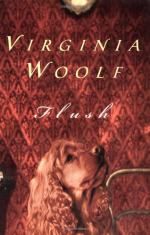 Flush, the red cocker spaniel, began his life on a farm named Three Mile Cross. He loved running in the fields where he chased birds and animals.

Flush was given to Elizabeth Barrett Browning who lived on Wimpole Street in a posh section of London, England.

Flush stayed in Miss Barrett's bedroom most of his days on Wimpole Street. She was sickly and didn't go out of her room often.

On occasion, Miss Barrett would take Flush to Regent's Park in London where she would take him for a walk. All dogs had to be on chains in the park.

One day at the market, thieves stole Flush and took him to a rundown and crime-ridden neighborhood known as Whitechapel.

After Flush was stolen, he was thrown into a horrible cellar room with other stolen...