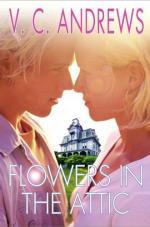 Virginia C. Andrews
This Study Guide consists of approximately 38 pages of chapter summaries, quotes, character analysis, themes, and more - everything you need to sharpen your knowledge of Flowers in the Attic.

Flowers in the Attic Summary & Study Guide includes comprehensive information and analysis to help you understand the book. This study guide contains the following sections:

This detailed literature summary also contains Topics for Discussion and a Free Quiz on Flowers in the Attic by Virginia C. Andrews.

Flowers in the Attic is the first novel in the Dollanganger series by V.C. Andrews. In this novel, four siblings are locked in a secluded second story room in the childhood home of their mother after the death of their father. The children are told they will only have to remain here until their grandfather has died and left his entire estate to their mother. However, as the years pass and the children have been locked away for more than three years, they begin to doubt their mother's devotion to their safety and begin searching for a way to escape. Flowers in the Attic is a dark, Gothic tale of greed and incest that will keep readers spellbound until the final paragraph.

The Dollanganger family lives in Pennsylvania where their father often travels on business for the public relations firm for which he works. When their father is home, the children are plied with many gifts and watch as their parents greet each other with deeply felt affection. The family grows when the mother gives birth to twins, a boy and a girl, each as angelic and perfect as the two older children, Cathy and Chris. However, everything changes when the father is killed in a car accident on the night of his thirty-sixth birthday. The mother begins to struggle to pay the bills. The mother is uneducated and has no means by which to make money to care for her family or any desire to become educated for this purpose. Instead, the mother turns to the family she once shamed and ran away from.

Mother informs the children that they will be forced to abandon their home and all their possessions except for two suitcases in order to move into the home of her parents. Mother tells the children that her father is very ill and will die soon. Due to the fact that mother's two brothers were both killed when they were young, she is her father's only heir. Mother hopes to win back her father's love and to be named in his will. To do this, however, she must return to her childhood home. Mother rushes the children onto a midnight train and marches them through desolate fields to arrive at the biggest, most wealthy home they have ever seen. Once there, the children are marched up the stairs where they are locked in a secluded room on the second floor by their grandmother. The children are given a list of rules and ordered to obey them while they hide in this room to await their grandfather's death.

At first the children believe they will only remain in this room for a few short days until their mother can tell their grandfather of their existence. However, this changes over time and the children are informed that their grandfather must never know of their existence. Mother assures them, however, that grandfather is so ill he will die within days or weeks. Chris and Cathy try to make this situation into a game for the younger children, creating a playroom in the attic that can be accessed through a wardrobe in the secluded bedroom where they wait. Chris and Cathy, with the help of their mother, clean the attic and begin decorating it with flowers and other creations, making a garden for the younger children. Over time, the younger children grow used to playing in the dusty attic, joining in on making bugs and flowers for the garden or playing hide and seek among the old armoires and trunks.

Mother attempts to make the children's time in the secluded room fun by bringing them expensive gifts, drawing implements, a television, and music to listen to. At Christmas, Mother brings rich, decadent food and wonderful presents. However, as time continues to pass, Mother's visits become less and less frequent. One day Mother arrives in the room and announces that she has gotten married to a wonderful man she is confident will love her children. Mother does not notice, however, that her two oldest children are not children anymore, but adolescents who need to be among other teens their own age in order to blossom in their own sexuality. Mother also does not know that the grandmother has caught Cathy staring at her naked body in the mirror and punished her severely by putting tar in her hair and forcing Chris to cut the front of her precious locks.

Chris gets the idea of making a key out of an impression taken from the key his mother uses to gain access to their secluded room. Using this key, Chris is able to escape from the room at night and rummage through his mother's bedroom, stealing the money she leaves carelessly lying around. Chris hopes to get enough money to care for himself and his siblings upon their escape. During this time, Cory becomes ill and Cathy insists that Mother take him to a hospital. Mother does, returning a few days later to inform them that Cory has died. The children are heartbroken, but more determined than ever to escape. Then one night Chris decides to go see the grandfather, to tell him of his and his siblings existence. However, Chris discovers that the grandfather has been dead for months. Not only this, but Chris overhears a couple of servants discussing the will and learn that if anyone ever proves of the existence of Chris and his siblings, their mother will lose everything. Chris also learns that his mother has been spiking the powdered donuts sent to them each day with arsenic.

Chris returns to the room and tells Cathy all he has learned. Chris then feeds Mickey, the mouse Cory tamed, a piece of powdered donut. The mouse dies. Chris and Cathy pack their things and escape that night, taking the mouse with them in the hopes of convincing the police of their mother's crimes against them. However, once they are safe from Foxworth Hall, Cathy and Chris decide to leave revenge for another day.

More summaries and resources for teaching or studying Flowers in the Attic.

Flowers in the Attic from BookRags. (c)2022 BookRags, Inc. All rights reserved.