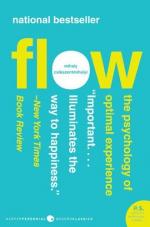 Mihály Csíkszentmihályi
This Study Guide consists of approximately 31 pages of chapter summaries, quotes, character analysis, themes, and more - everything you need to sharpen your knowledge of Flow.

The University of Chicago is the site used by Mihaly Csikszentmihalyi as a launching pad for his studies in flow, achieving the optimal experience. Through extensive research performed at the private university, the author was able to develop and refine his theories on controlled consciousness. The work began as part of the author's doctoral dissertation.

Csikszentmihalyi states that the hierarchy of needs is the biggest determining factor in happiness.

Control of consciousness is the basis on which the flow principle is formed.

More summaries and resources for teaching or studying Flow.