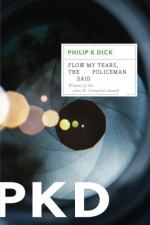 Philip K. Dick
This Study Guide consists of approximately 34 pages of chapter summaries, quotes, character analysis, themes, and more - everything you need to sharpen your knowledge of Flow My Tears, the Policeman Said.

This detailed literature summary also contains Quotes and a Free Quiz on Flow My Tears, the Policeman Said by Philip K. Dick.

The following version of this book was used to create this study guide: Dick, Philip K. Flow My Tears, the Policeman Said. New York: Mariner Books, 2012.

The novel is set in the United States at an unspecified point in the future. Following a civil war, a totalitarian police state has come to power in the country and has established a system of comprehensive surveillance in order to maintain power. A few small rebel groups still exist in resistance to the regime. The novel’s protagonist is Jason Taverner, a famous singer and television host who lives in Los Angeles. Jason is secretly a ‘six,’ which is a type of genetically engineered human. One day, after Jason is attacked by a former lover, he is rushed to a hospital. He wakes up in a cheap motel, and it soon becomes apparent that no one remembers or recognizes him. Moreover, all evidence of his existence appears to have vanished as well.

Jason realizes that he does not have any ID cards and is therefore subject to being arrested by the police. Jason goes to a document forger, a young woman named Kathy Nelson. The forged documents are of high quality. Kathy quickly becomes attracted to Jason, but Jason, wishing to avoid attention, flees her company. Unfortunately, Jason is soon intercepted by a police officer named McNulty. McNulty brings Jason to a police station for processing, including the taking of fingerprints. McNulty secretly places a tracking device on Jason and then releases him. After McNulty sees that there are no documents or files on Jason, McNulty refers the investigation to Felix Buckman, a high-ranking police officer. Meanwhile, Jason flees Los Angeles and goes to Las Vegas. He befriends a woman named Ruth Rae, who gives him temporary refuge in his apartment. To Jason’s surprise, Ruth espouses the value of love and selflessness, while Jason has generally lived on principles of selfishness.

The police eventually track down Jason and bring him back to Los Angeles. Felix Buckman interviews Jason personally. Buckman believes that Jason is a covert operative for a rebel group. Buckman places another tracking device on Jason and releases him. Buckman’s sister, Alys, approaches Jason and helps him remove the tracking devices, as she is generally opposed to the police state. Alys then gives Jason temporary refuge in her home. Jason soon realizes that Alys, unlike everyone else, seems to still remember who he is. However, when Jason finds Alys dead, he flees the house and is spotted by a police officer. Jason soon realizes that his life has seemingly reverted to normal, as everyone recognizes him again. He begins to wonder if his life of fame is an illusion created by a synthetic drug.

Buckman is soon made aware that Alys died of a drug overdose. The drug she was taking was new and experimental. One side effect it had was to cause others to perceive a world in which Jason Taverner did not exist. Buckman and Alys had an incestuous relationship, and Buckman worries that if Alys’ death looks like a suicide, it will cause speculation about his and Alys’ relationship to become more prominent. Buckman decides to frame Alys’ death as a murder committed by Jason. Jason decides to turn himself in, and Buckman feels a sense of sadness for the injustices he feels that he has no choice but to commit. At trial, Jason is exonerated, and he is able to go back to hosting his show. The Epilogue states that, over the years, the police state eventually collapses under its own weight.

More summaries and resources for teaching or studying Flow My Tears, the Policeman Said.