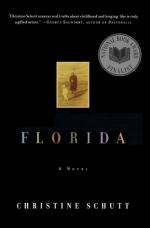 This detailed literature summary also contains Topics for Discussion and a Free Quiz on Florida by Christine Schutt.

At the age of five, Alice Fivey's father dies in a mysterious car accident and she loses her mother to a mental asylum at the age of ten. Orphaned, Alice is left to live with relatives, and is moved from one set of relatives to the next. As she slowly matures into a young woman, her caregivers shape Alice's identity.

Alice leads an unstructured, carefree life with her mother, but together their lives are unstable and uncertain. Alice never wears fashionable new clothing, but wears clothing that her mother makes. Alice doesn't take luxurious vacations with her mother. She dreams of moving to Florida. The instability of the household is further eroded by her mother's bad habit of entering into relationships with foul-tempered men who spend their time drinking rather than working. When it becomes clear that Alice's mother cannot care for Alice properly, her mother is sent to a mental asylum, and Alice is left in the care of her relatives.

At first, Alice lives with her Uncle Billy and Aunt Frances until she is 13 years old - she never gets beyond feeling like a guest her uncle's home. Uncle Billy and Aunt Frances are a wealthy couple who provide a stable household for Alice during her three-year stay. Every March, they take Alice to their vacation home in Arizona. Although Alice has the luxury of wearing fancy shoes and clothing, swimming in her uncle's private pool, and learning to ride horseback, she must submit to the rules of the household. Aunt Frances insists that Alice learn proper manners and for Alice, this means asking permission before doing anything and doing her best to appease her relatives so that she can continue to enjoy the luxuries that are offered to her.

Alice then moves to live with her grandmother Nonna for a few years until she moves out at an unspecified age. While living with Nonna, Alice has more freedom because Nonna is elderly and cannot keep a watchful eye over Alice. During this time, Alice's spending time with boys is reminiscent of the way in which her mother interacted with men.

Despite the ways in which Alice seems to take after her mother, she finally moves to New York. Although Alice continues to have trouble in her relationships with men, Alice is a strong independent woman. She finds a stable job as an English teacher.

When Alice is a young woman, she reconnects with her mother, and spends her summer vacations visiting with her in California. As Alice finds meaning in her life through inspiring her students, her mother's life is on the decline. Over the years, Alice's mother becomes very unhealthy, and she is admitted to a nursing home. Ultimately, when Alice reaches a point in her life where she is happy with herself and the life she has made for herself in New York, she is forced to witness a second, quite different, loss of her now elderly mother.