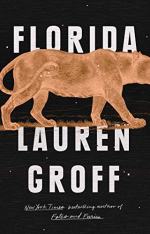 Related Topics
Fates and Furies
The Monsters of Templeton
Matrix: A Novel

Lauren Groff
This Study Guide consists of approximately 56 pages of chapter summaries, quotes, character analysis, themes, and more - everything you need to sharpen your knowledge of Florida.

The following version of this book was used to create this study guide: Groff, Lauren. Florida. New York: Riverhead Books, 2018.

Florida is a collection of 11 short stories linked by common themes and its characters' relationship to the state for which it is named. In the first story, “Ghosts & Empties,” an unnamed narrator describes taking late night walks through her neighborhood in order to ease her chronic anxiety, which is partially related to her fears of climate change. She observes her neighbors, including an obese teenager on a treadmill and a friend drying herself off after a shower. She reflects on the gradual gentrification of her neighborhood and the city's efforts to push out the homeless population. At the end of the story, she imagines herself at home in bed with her children, but continues walking.

“At the Round Earth's Imagined Corners” tells the story of Jude, a young boy who lives with his parents in a Florida swamp. His mother, seeking a better life for herself away from her domineering husband, leaves Jude with his father, and he grows up lonely and surrounded by the snakes his father collects. When his father is killed by a snake, Jude goes to Boston where he attends college and is reunited with his mother. He marries and returns to Florida with his wife. They sell off the swampland surrounding Jude's father's house to a nearby university and have a daughter. Years later, Jude wakes up one morning to find he has inexplicably gone deaf. When his wife takes their daughter off to college, Jude rows out on the lake on their property in a canoe and loses his oars. He believes his father's ghost is in the boat with him and that he is about to die. Instead, the wind picks up, gliding the canoe back to shore.

In “Dogs Go Wolf,” two sisters (ages four and seven) are left alone by their mother and her friends in an abandoned fishing village off the coast of Florida after a hurricane. The girls do their best to survive with limited food and water sources, until one day they spot a couple having a picnic on the shore and they are rescued.

“The Midnight Zone” tells the story of a woman on a camping trip with her husband and two young sons. After her husband is called back home on business, the woman falls and hits her head. The nearest town is 20 miles away, and the woman spends a harrowing night imagining she is on the verge of death as her children attempt to care for her. Her husband returns in the morning and she can see by his expression that she looks as bad as she feels.

The narrator of “Eyewall” is grieving for her ex-husband, who left her for another woman shortly before his death, and for the fact that she never had the children she desperately wanted. She has barricaded herself in her house while a hurricane rages outside, and she is visited by three ghosts – that of her former husband, that of a man she loved in college who died by suicide, and that of her father. She works through her grief with the help of these specters.

In “For the God of Love, For the Love of God,” a woman named Amanda visits a childhood friend, Genevieve, at her home in France. She discovers that Genevieve's husband Manfred is suffering from bipolar disorder, the couple is experiencing money problems, and their four-year-old son Leo is distraught. Meanwhile, it is revealed that Amanda's husband Grant is having an affair with Genevieve and plans to leave Amanda when they return to the States.

“Salvador” tells the story of a woman vacationing in Brazil when a storm hits and she is rescued by a shopkeeper from whom she has been receiving disapproving looks throughout her stay. She spends a frightening night in his store, worried that he will assault her, but he merely drinks beer in silence. In the morning she helps him clean up his store.

In “Flower Hunters,” a woman plagued by anxiety about climate change and the end of the world reflects on the ways her existential dread is affecting her life and relationships as she reads a book by 18th century naturalist William Bartram.

In “Above and Below,” a woman who has recently lost her job, apartment, and boyfriend leaves her university town to drive along the Florida coast. She sleeps on beaches and meets an assortment of vagrants before ending up at a commune. She wanders off from a bonfire party at the commune one night and suffers a panic attack while thinking of the alligators, snakes, and insects surrounding her in the dark. She then returns gratefully to the revelers at the party.

In “Snake Stories,” an unnamed narrator is out jogging when she happens upon a woman who has been sexually assaulted. The victim refuses the narrator's offer to contact law enforcement or take her to the hospital because she is an undocumented immigrant. The experience reminds the narrator of being raped by a former boyfriend that she had thought was a nice guy.

Finally, in “Yport,” an American author brings her two young sons to France to conduct research for a book about French writer Guy de Maupassant. Over the course of their trip, the woman is increasingly consumed with feelings of dread, and gradually realizes that she does not want to write the book at all, that she actually hates Guy de Maupassant. As her anxiety reaches a climax, the woman learns via email that a dear friend has died by suicide. This information allows her to put her feelings in perspective and move forward with a greater acceptance of things she cannot control.