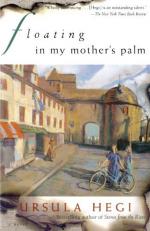 Ursula Hegi
This Study Guide consists of approximately 21 pages of chapter summaries, quotes, character analysis, themes, and more - everything you need to sharpen your knowledge of Floating in My Mother's Palm.

Floating in My Mother's Palm Summary & Study Guide includes comprehensive information and analysis to help you understand the book. This study guide contains the following sections:

This detailed literature summary also contains Topics for Discussion and a Free Quiz on Floating in My Mother's Palm by Ursula Hegi.

Floating in my Mother's Palm is a novel by Ursula Hegi. This novel is a collection of parables that tell the story of life in one small German town. The stories are all written in the voice of a young woman who is looking back on her childhood and the people who impacted her life. Floating in my Mother's Palm is a sweet remembrance of childhood that includes poignant glances of tragedy as seen through the eyes of a child.

The novel begins with the story of the narrator's birth, a story that must have been told to her often. The narrator's mother went into labor and was told the baby had died, so she left a place filled with people she had once trusted explicitly and went to a midwife who helped her deliver a healthy child. The novel continues with a story of the local gossip who has a form of dwarfism that the locals in their superstition believes stems from her mother dropping her on her head. This idea of superstition continues with the story of how a faith healer saved Hanna's grandmother from death by removing the poisons from her body to heal a blood clot in her leg.

The author continues her story by introducing Klara Blocker, the family maid who was once in love with an American soldier at the end of the war. This soldier fathered Klara's son, Rolf. However, Klara rarely speaks of this man and has not told her son about him. From Klara, Hanna tells the story of how she used the idea of her grandmother's experience with the faith healer to attempt to heal her friend, Renate's leg that was affected by polio, only to heal the friendship rather than the leg.

The narrator tells the story of how her father has always behave cautiously except in the fact that he married a wild woman who won his heart while he was engaged to another woman. This was the only reckless act that Hanna can recall her father ever committing and it makes her think that her father married her mother so that they might balance one another out. Then Hanna tells the story of a damaged young man living in her family's home as well as several stories of murder and death that impacted some of the people living in town.

More summaries and resources for teaching or studying Floating in My Mother's Palm.

Floating in My Mother's Palm from BookRags. (c)2022 BookRags, Inc. All rights reserved.