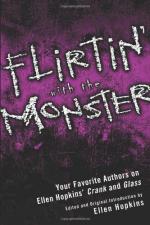 Plot Summary
+Chapters Summary and Analysis
Introduction and Part I Introduction
Role Models by Niki Burnham
More Than Just a Broken Line by Susan Hart Lindquist
Love Is an Addiction by Megan Kelley Hall
Why Kristina Can't Just Quit by Mary Bryan
A View from the Bench by Judge John Tatro
Letting a Loved One Go by Gail Giles
The Secret's Out by Terri Clark
The Importance of Being Between by Micol Ostow
Reality-Based Memoir vs. Non-Fiction by Cinda Williams Chima
Part II
Characters
Objects/Places
Themes
Style
Quotes
Topics for Discussion
Order our Flirtin' with the Monster: Your Favorite Authors on Ellen Hopkins' Crank and Glass Study Guide

Niki Burnham
This Study Guide consists of approximately 28 pages of chapter summaries, quotes, character analysis, themes, and more - everything you need to sharpen your knowledge of Flirtin' with the Monster.

Part II contains the thoughts and feelings of Ellen's family: Her husband, her daughter Kelly, Kristina and her son, Orion. Orion's thought are last because he is the future.

Although things had settled down seven years ago, the six years of disruption had left its mark on John. He was still angry. The first time that Kristina screamed at him that he was not her father, he felt a sting that endured. He had thought of Kristina and her brother as his own. He had been their only father since Kristina was five-years-old. They were a family. They went to the beach and to museums. They had good clothes and the latest toys and a myriad of pets.

When Kristina was fifteen, the family's German shepherd, Blitz, scratched relentlessly at her door one night. When he wouldn't stop, John...

More summaries and resources for teaching or studying Flirtin' with the Monster: Your Favorite Authors on Ellen Hopkins' Crank and Glass.

Flirtin' with the Monster: Your Favorite Authors on Ellen Hopkins' Crank and Glass from BookRags. (c)2021 BookRags, Inc. All rights reserved.