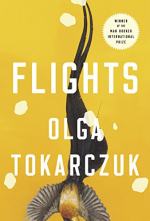 Olga Tokarczuk
This Study Guide consists of approximately 76 pages of chapter summaries, quotes, character analysis, themes, and more - everything you need to sharpen your knowledge of Flights.

This detailed literature summary also contains Quotes and a Free Quiz on Flights: A Novel by Olga Tokarczuk.

The following version of this book was used to create the guide: Tokraczuk, Olga. Flights. Riverhead Books, 2018.

Flights is a novel comprised of 116 vignettes loosely interconnected through travel and escape from encumbrance. Themes of these vignettes involve motion versus stasis, the human body, and the passage of time. These snapshots of journeys are the results of a collection of curiosities.

As each vignette takes the reader winding through time and space—or as the Tokarczuk describes—the archipelago of time, the reader is introduced to fellow pilgrims who vary in their pursuits, with many turning their explorations inward into the human anatomy. But one of the overarching themes, like the epic journey of the hero Odysseus in “the Odyssey” which the writer alludes to in several vignettes, the real traveler does not go on mere vacations of circular trips, living lives of repetition, but instead is constantly in motion, going forward through linear time in a form of quest. Hence, the term “pilgrim.” From the very first vignette, when the narrator states, 'I realize I am stuck," travelers differ in their degree of being encumbered by things that pin them down, like the frog the narrator once dissected (2). According to the narrator, being free from these encumbrances, mental, physical, and spiritually ones, allows a being to journey free through life.

To the narrator, even an identity is an encumbrance, so she strives to maintain anonymity when she travels by avoiding travelers who share her native language. Home and its trappings are the most powerful trappings, it is the one that weighed down her family when she was a child and sentence them to minor orbital vacations. But even religion or having set opinions prove to be encumbrances, being equated to extra baggage one must carry with them, and through the vignettes, Tokarczuk writes about travelers with varying degrees of such baggage. Those with the least are her greatest pilgrims, those with the most are not pilgrims at all.

The narrator identifies her pillars of knowledge as “physiology and theology", body and soul. She seeks out the unique, the monstrous, the deformed, the “curiosities” that stand out—and thus gain immortality--by virtue of breaking the norm and not fulfilling a label or identity. An unpredictable rat, an armchair with the springs coming through, this novel explores the truths that are hidden on the inside and are discovered only through pilgrimages to find these exceptions that defy being pinned down by definition. The vignettes are often linked to another by just one word, or phrase, such as shrunken “Maori heads” mentioned in one then develops into the main theme of a vignette that follows.

The novel begins with the dawning of the narrator’s self-awareness and the fact that she is stuck, ironically occurring at nightfall and the darkening of the outside world. The night encloses her and thus shows her the limits of her current world. Then, there is the narrator’s experiences with a river on her first journey that leads her to the realization that motion is life, whereas stasis, such as that which the river’s drowning victims experience, is death and decay. Her formative years strengthen the discovery that she made at the river that day: that a journey is like stepping into a river, you can never step into the same place twice. Because just as the water at that specific place has moved on, so does time, and so every moment of every journey is unique and can never really be repeated. Constructs of time itself can be an encumbrance. But those who settle down, who live in the circular existence of repeating same life’s moments over and over again, are already decaying.

As the novel progresses, her vignettes increasingly address the spiritual aspect of the pilgrimages: Travelers worshipping relics and body parts of saints, camera clicks that sound like “amens.” Several of the longer narratives, interrupted by other vignettes sometimes three or four times throughout the entirety of the book, eventually wind their way to thought-provoking conclusions about the nature of time, existence, religion, and immortality.