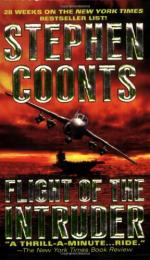 Stephen Coonts
This Study Guide consists of approximately 41 pages of chapter summaries, quotes, character analysis, themes, and more - everything you need to sharpen your knowledge of Flight of the Intruder.

Flight of the Intruder Summary & Study Guide includes comprehensive information and analysis to help you understand the book. This study guide contains the following sections:

This detailed literature summary also contains Topics for Discussion on Flight of the Intruder by Stephen Coonts.

The first novel published by Stephen Coonts was "Flight of the Intruder" in 1986, and the twentieth anniversary edition of the novel indicates that up until then he had written 13 more best sellers, several of which were made into films, including this book. It tells the story of Jake Grafton, a naval fighter pilot stationed on the USS Shiloh aircraft carrier in the Gulf of Tonkin during the Vietnam War. At the start of the novel, in the first of many air battle scenes, Jake's bombardier/navigator, Morgan McPherson, is hit by a stray bullet fired from a rifle as their A-6A Intruder aircraft flies low over North Vietnam. Morgan dies from the wound, and Jake takes this loss very hard. An emotional man who tries not to think too deeply about the mortal consequences of what he does in the war, Jake nevertheless cannot shake the growing conviction that the bombing targets he is being assigned are virtually worthless. He believes that political considerations are preventing the waging of the war in a way that will enable American forces to win it. He decides to take the matter into his own hands by enlisting his new bombardier/navigator, Virgil "Tiger" Cole and a squadron intelligence officer named Abe Steiger in his plan to bomb the North Vietnamese National Assembly building in Hanoi.

During shore leave in Hong Kong, Jake meets a young woman named Callie McKenzie who works at the American Consulate, and romance ensues. The two write to each other after Jake returns to duty, and they meet again when he comes to shore in the Philippines, after executing his secret mission with Tiger. The unauthorized bombing has been discovered by the squadron commander, Frank Camparelli, a fair man who nevertheless demands obedience to orders, and he organizes a hearing. Aided by changing political winds in Washington, Jake is exonerated at the hearing, and a bombing escalation in the war follows. Jake and Tiger are shot down on a mission, and parachute to the ground. An air force pilot named Frank Allen who had been briefly introduced earlier in the story tries to rescue them, but his plane also is shot down and he dies. Tiger is immobilized by a broken back but Jake locates him and then kills three armed Viet Cong with his pistols before the two are rescued by a helicopter. A Postscript describes the fate after the war of the principal characters, including Jake, who marries Callie, stays in the navy, and eventually takes command of a nuclear submarine.

More summaries and resources for teaching or studying Flight of the Intruder.

Flight of the Intruder from BookRags. (c)2022 BookRags, Inc. All rights reserved.