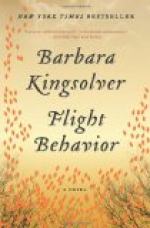 Barbara Kingsolver
This Study Guide consists of approximately 64 pages of chapter summaries, quotes, character analysis, themes, and more - everything you need to sharpen your knowledge of Flight Behavior: A Novel.

Dellarobia Turnbow was born and raised in Feathertown, Tennessee in the southern Appalachian Mountains, and feels trapped in her rural, mommy life and shotgun marriage. One November day she finally feels ready to throw it all away for an affair with a young telephone repairman. Yet as she climbs the mountain on the back part of the family farm to meet her potential lover, she sees an epic vision of orange covering the trees and flying into the sky across a valley on another ridge. Without her glasses she can't see what it is, but her religious upbringing makes her think it is a sign that she is making a bad decision and she returns home to her husband Cub and young children, Preston and Cordelia.

Dellarobia and Cub share their property with Cub's parents, Hester and Bear. Because of the collapsed economy and terrible weather that ruined the year's hay crop, the farm is failing under an equipment loan. Bear signs a contract with a logging company to clear-cut the mountain where Dellarobia saw the flame-colored phenomenon. Feeling guilty about why she was up there to witness it, Dellarobia circuitously urges Cub and his father to check out the mountain before they strip it in case there is something more valuable than trees up there. The family takes a look and discovers that the trees and mountain are covered in monarch butterflies. In church the following Sunday, Cub testifies to Pastor Bobby Ogle and the congregation that Dellarobia had a "vision" that led them to discover the butterflies.

The small community is divided on whether the butterflies are some kind of gift from God, but Bear is determined to log anyway, desperate for the money so the Turnbows won't lose their entire farm. News of the butterflies slowly spreads, and Dellarobia is unexpectedly visited by an immigrant family from a small town in Mexico where the monarchs used to spend their winters before a recent flood and mudslide that destroyed the entire community. Dellarobia is visited by reporters who want to hear her "miraculous" story, but also by a scientist named Ovid Byron, who has studied the migratory patterns of monarchs for the length of his career, and sees their inexplicable roosting in Tennessee, miles away from their usual routine, as an ominous sign of climate change. The differences in ecology and temperature between Mexico and Tennessee could lead to the death of the monarchs before winter is over, and thus their virtual extinction. Ovid sets up a full lab with assistants to study the butterflies in the Turnbows' barn, but often finds the local narrow-mindedness about science and global warming to be mind-boggling.

After a national news report erroneously claims Dellarobia was saved from suicide by her vision of the butterflies, Dellarobia finds herself becoming uncomfortably famous and wishes to have her privacy back, though she grows closer and more attracted to Ovid as she begins working with him on collecting data for his experiments. Though Hester and Dellarobia don't ordinarily have the best relationship, Hester implores Dellarobia to urge Cub to stand up to Bear about the logging. Hester's deep-rooted faith guides her to continue in the idea that the butterflies came to their property straight from God himself. As Ovid persuades Dellarobia about the reality of climate change, and the risks of flooding and mudslides that logging would bring to their property, Dellarobia readily agrees with her mother-in-law, but Cub is harder to convince about global warming's dangers, particularly to farmers.

The more attracted she becomes to Ovid, the more Dellarobia realizes her marriage to Cub, born of an unplanned high school pregnancy that ended in a miscarriage, is little more than fear of change and newness. Hester reveals she remained distant from Dellarobia because she always assumed she would leave, too smart and ambitious for her son. Though Ovid's wife Juliet arrives and Dellarobia is forced to admit her self-delusion that she could have a future with the scientist, her conviction that her marriage is wrong for both her and Cub remains strong, and she tells him they must separate. With the help of Pastor Bobby and Dellarobia, Hester and Cub convince Bear to grudgingly break his contract with the logging company.

The butterflies come through a strange, mild winter and begin to make movements toward living in their usual (though new) migratory schedule. But after a week of spring-like weather a sudden and deep snowstorm makes Ovid and Dellarobia certain the monarch population is lost. Yet as the world thaws again, Dellarobia witnesses some fraction of the butterflies resuming their flight patterns. The world may be completely different as Dellarobia plans to move off the farm with her children and return to college, but it is more than possible that both she and the butterflies will survive.

More summaries and resources for teaching or studying Flight Behavior: A Novel.

Flight Behavior: A Novel from Gale. ©2005-2006 Thomson Gale, a part of the Thomson Corporation. All rights reserved.