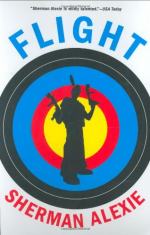 Alexie, Sherman
This Study Guide consists of approximately 35 pages of chapter summaries, quotes, character analysis, themes, and more - everything you need to sharpen your knowledge of Flight.

This detailed literature summary also contains Quotes and a Free Quiz on Flight: A Novel by Alexie, Sherman.

The following edition of this book was used to create this study guide: Flight. Alexie, Sherman. Black Cat. New York, 2007.

A note about terminology in this study guide: the author Alexie uses the racial descriptor "Indian," as opposed to a more broadly accepted term like "Native American" or "first nations." For instance, in the opening pages of the novel, the main character and first-person narrator (a 15-year-old boy named Zits) describes his own racial background :"Yes, I am Irish and Indian, which would be the coolest blend in the world if my parents were around to teach me how to be Irish and Indian. But they're not here and haven't been for years, so I'm not really Irish or Indian" (5). Since Alexie -- a self-described "Indian" -- exclusively uses this term in this novel to describe race, the same descriptor will be used in this study guide, to most accurately convey the author's tone and intent.

The novel begins when Zits wakes up in an unfamiliar foster home, and privately thinks about his many miserable experiences with foster parents throughout his transient years in the system throughout Seattle. When Zits' new foster parents talk to him in a passive-aggressive way at breakfast, Zits quickly becomes frustrated with them, and shoves his foster mother out of the way when he flees the house and runs down the street. Zits is quickly chased down by two police officers, although Zits calms down when he realizes that one of the officers is the relatively friendly Officer Dave, who chats with Zits as they bring him to jail.

While in a holding cell, Zits strikes up an unlikely friendship with a mysterious and philosophically provocative white boy who calls himself Justice. Justice and Zits begin squatting together in an abandoned downtown building, committing petty crimes, and Justice quickly convinces Zits to enact the Ghost Dance, a violent act that would bring back the spirits of all the dead Indians. Zits decides that he will do the Ghost Dance by going to a downtown Seattle bank and violently, randomly shooting whoever happens to be in the lobby. Zits actually does this, and is quickly shot in the back of the head.

However, instead of simply dying, Zits wakes up in a seedy motel room in the early hours of the morning, as another man is quickly getting ready. Zits deduces that he is somehow occupying the mind and body of an FBI agent named Hank Storm, and that he is in rural Red River, Idaho, during a crucial moment of political unrest. As Hank, Zits discovers that two lauded Indian activists, Horse and Elk, are in fact double-agents for the FBI, and the four FBI agents shoot a hapless hostage named Junior. Zits is conflicted when his partner, Art, who coldly committed the murder, clearly has deep compassion for his longtime professional partner, Hank.

This triggers a sequence of scenes where Zits occupies the mind and body of several different people throughout history, with Zits being unable to control where in time and history he goes, or how long he stays there. Next, Zits occupies the mind and body of a young, mute boy who watches from a large camp as the Indian forces defeat General Custer at Little Bighorn in 1876. Then, Zits "becomes" Gus Sullivan, an old and apparently daft Irish soldier who nonetheless, with his expert skills as a tracker, leads a group of immature American soldiers to massacre an Indian encampment. Sullivan then suddenly turns on the American forces, attempting to carry a five-year-old Indian boy to safety along with another American soldier. Then Zits becomes a recreational pilot named Jimmy, at something like the present day, who commits suicide by flying his plane into the ocean while grieving how his friend, Abbad, had in fact committed a violent terrorist act. Finally, Zits occupies the mind and body of his own absent father, who is a homeless, verbally abusive alcoholic living in Tacoma, a city near Seattle.

Zits then finds himself back in his own body, in the downtown Seattle bank -- only, this time, he has not begun to shoot anybody. With his mind transformed by his experience, he decides to walk to the police station and turn his weapons in. After months of undergoing psychological testing, Zits is cleared to return into the foster system, where Officer Dave intervenes and arranges for Zits to be in the care of Officer Dave's own brother and sister-in-law. These foster parents prove to be incredibly generous and compassionate towards Zits, who can picture a tremendously positive direction for his life in just the first moments of living in their house.

More summaries and resources for teaching or studying Flight: A Novel.