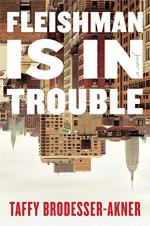 Taffy Brodesser-Akner
This Study Guide consists of approximately 42 pages of chapter summaries, quotes, character analysis, themes, and more - everything you need to sharpen your knowledge of Fleishman Is in Trouble.

Fleishman Is in Trouble Summary & Study Guide includes comprehensive information and analysis to help you understand the book. This study guide contains the following sections:

This detailed literature summary also contains Quotes and a Free Quiz on Fleishman Is in Trouble by Taffy Brodesser-Akner.

The following version of this book was used to create this study guide: Brodesser-Akner, Taffy. Fleishman Is in Trouble. New York: Random House, 2019.

The novel opens in present-day New York City. Toby Fleishman is a 41-year-old Jewish man. He and his wife Rachel have recently separated and are in the process of divorce. They have decided to share custody of their two children: 11-year-old daughter Hannah and nine-year-old son Solly. Toby has recently reestablished connections with old college friends Seth and Libby so that he has people who can help comfort him. Toby has also begun dating using a phone application. He goes on dates with many women, and they often have sex. However, none of the dates develop into continuing relationships, and Toby feels lonely.

One day, Rachel drops the kids off at Toby’s apartment unannounced, and soon after, she ceases all communication with Toby. Toby is angry at these abrupt actions, but he focuses on taking care of the children. He also focuses on work. He is an attending physician at a hospital in the city. A new patient named Karen Cooper arrives at the hospital. She is unconscious and requires a liver transplant. Toby monitors the case closely so that she can receive a transplant as soon as possible. The novel provides background information on Toby and Rachel’s marriage. Rachel founded her own talent agency years ago, and the agency has become quite successful. Rachel’s annual income is far larger than Toby’s, even though Toby makes over $250,000 per year. Rachel accused Toby of not being ambitious enough, and Toby accused Rachel of being neglectful of their children in favor of her career.

A few more days go by, and Toby is still unable to contact Rachel. He begins to suspect that she may be having an affair with Sam Rothberg, a married friend of theirs; Rachel once expressed romantic interest in Sam. Sam is a highly successful entrepreneur. Meanwhile, Karen Cooper receives a liver transplant and seems to recover. Unfortunately, she then dies of an unpreventable complication that unfortunately arose due to the surgery. Karen’s sister tells Toby that, before Karen became unconscious, she had decided to leave her husband, who was controlling and unfaithful. The novel gives background information about Toby’s friends Libby and Seth. Libby is married and has children, and she is often frustrated with those parts of her life. She is also frustrated with the disapproval she sometimes faces as a wife/mother who also has creative/career ambitions. Seth has never been married and is still sometimes ambivalent about marriage, but he decides that he wants to propose marriage to his current significant other, Vanessa.

Toby drops off Hannah and Solly at their sleepaway summer camp, and he feels even more lonely, so he adopts a dog. One day, Hannah is expelled from camp for sending a sexually explicit photo of herself to a boy, so Toby takes both Hannah and Solly out of camp. The narrative then recounts the novel’s events from Rachel’s perspective. This part of the novel shows how Toby was sometimes unfair to Rachel and that she regularly tried to spend time with the children. The divorce process compounded the many stresses in Rachel’s life, and she felt overwhelmed, so she decided to temporarily cut off contact with Toby and take a break from work. She also had an affair with Sam, but Sam would not leave his wife for Rachel. Rachel felt that her success would prevent her from ever having a consistent relationship.

By the end of the novel, Seth proposes marriage to Vanessa, and Vanessa accepts the proposal. Meanwhile, Libby manages to attain newfound gratitude for the fulfillment that her husband and children bring her. In the novel’s final scene, Rachel goes to visit Toby, possibly because she wants to give their marriage another try.

More summaries and resources for teaching or studying Fleishman Is in Trouble.

Fleishman Is in Trouble from BookRags. (c)2022 BookRags, Inc. All rights reserved.