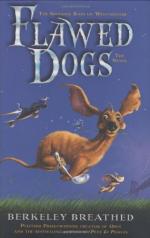 Berkeley Breathed
This Study Guide consists of approximately 19 pages of chapter summaries, quotes, character analysis, themes, and more - everything you need to sharpen your knowledge of Flawed Dogs.

Flawed Dogs: The Novel: The Shocking Raid on Westminster Summary & Study Guide includes comprehensive information and analysis to help you understand the book. This study guide contains the following sections:

This detailed literature summary also contains Topics for Discussion on Flawed Dogs: The Novel: The Shocking Raid on Westminster by Berkeley Breathed.

"Flawed Dogs: The Shocking Raid on Westminster" is the story of a dog called Sam the Lion's trials and tribulations. Beginning at a dog fight, the book opens with an image of Sam curling up and going to sleep rather than fighting, smiling when he imagines he hears Heidy's voice. The action then takes the narrative back three years, to his arrival at an airport, where Heidy spots him from the airplane window as he is unloaded. He is supposed to be adopted by an awful woman called Mrs. Nutbush, but Heidy sets him free, though she doesn't like dogs. However, as Heidy gets into the car of her uncle's housekeeper, Sam hops into her bag and goes with her.

Heidy must then adapt to life at her uncle's estate, as she has been orphaned and living with nuns for the past few years. However, Sam's presence is not welcome by the reigning dog, a poodle called Cassius who has ambitions to win the International Westminster Dog Show, one of the most prestigious shows in the world. Cassius sets Sam, who wins the local dog show, up to make it look like Sam has ripped the blankets of the baby on the estate. Still, Sam is pardoned until a few months later, when Cassius sets a plan in action that makes it look like Sam violently ran off with the baby. Thinking Sam is rabid, Uncle Hamish has the Sheriff take him away.

Sam then ends up at a home for unwanted dogs, but tries to run away home. There, Cassius stops him, and tricks him into a beaver trap, which severs one of Sam's legs. Some men then come and take Sam to the University Research Lab, where he stays for several miserable years, before arranging an escape. Once escaped, though, a car hits him, and he is adopted by the poor but caring driver, who makes him a false leg out of a ladle. However, the man thinks he has no choice but to enter Sam into a dog fight to settle his debts. At first, it looks like Sam will lose, as in the beginning of the book, but then he sees a poster for Westminster with Cassius's face on it, which gives him the spirit to win.

Sam then meets a dog called Peaches, who accompanies him back to the unwanted dogs' home, and they all come up with a plan to infiltrate Westminster. They do so by stealing Mrs. Nutbush's clothes and posing as her, then setting upon the competing dogs, making them all look ugly. When Cassius realizes that Sam is there, the two dogs get into a fight on an overhead catwalk. Heidy comes to help stop it, but Cassius turns on her. Sam has the dogs set a big bucket of muddy water on the catwalk, and he and Cassius fall to the floor. Sam, however, is all right, protected by his "angel," Peaches.

Later, the book ends with the unwanted dogs all on Uncle Hamish's farm, playing with Heidy, and with a visit from the rough-handed man to Sam.

More summaries and resources for teaching or studying Flawed Dogs: The Novel: The Shocking Raid on Westminster.