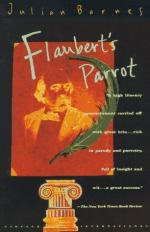 Julian Barnes
This Study Guide consists of approximately 48 pages of chapter summaries, quotes, character analysis, themes, and more - everything you need to sharpen your knowledge of Flaubert's Parrot.

Croisset was Flaubert's home in Rouen. It is a long, white property on the banks of the Seine. The house is now a museum about Flaubert and it contains one of the parrots.

Rouen is the French town that Flaubert lived in. Geoffrey visits it several times during his search for Flaubert.

The Hotel-Dieu is the hospital where Gustave's father was a surgeon. The hospital is now a museum, with one part devoted to Flaubert and the other to medical instruments. The museum owns one of the stuffed parrots said to be the model for Loulou.

Loulou was Felicite's parrot in Un coeur simple. Flaubert borrowed a stuffed parrot from the Museum of Natural History to sit on his desk while he was writing the novel. Geoffrey is now on a search to determine which parrot is the real Loulou from the two that...

More summaries and resources for teaching or studying Flaubert's Parrot.