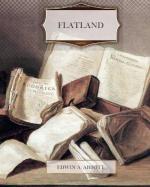 This detailed literature summary also contains Topics for Discussion and a Free Quiz on Flatland by Edwin Abbott Abbott.

Set in the world of Flatland, A. Square is a plane form living in a two dimensional reality. His place in the social hierarchy is in the middle class, and he describes effectively the other classes within his world. The dangerous Women, or single lines, the dull yet powerful Isosceles Triangles, or soldiers and laymen, the Equilateral Triangle, or tradesmen, the Nobility class, or Polygon class, and the Circles, or Priests, all combine to make a social order within Flatland. Their existence is complete with class strife, discrimination, alteration, regulation, wars, and power struggles, just as any other society in existence.

Waking from his dream, A. Square is soon visited by a stranger claiming to be of a third dimension. Just as he felt the need to teach Lineland individuals the error of their views, the stranger, Sphere, attempts the same with A. Square. His efforts through analogy, description, explanation, and action all fail, however, as A. Square believes his world to be superior to all others. However, when A. Square threatens Sphere, he is thrust into the third dimension to see for himself the reality of a solid existence.

On his return, A. Square has a vision of Pointland, the land of no dimensions. In the vision, the single existence in Pointland is contemplating his own perfection, and Sphere explains that to the Point, there are no other existences. As the only creature, it believes itself to be the center of all things, and the definition of perfection. When A. Square attempts to convince it otherwise, the creature hears only its own voice, since it remains unaware of any other being.

On his return to Flatland, A. Square attempts to convince his countrymen of the existence of the third dimension. As foretold, however, he is imprisoned for his views, and remains behind bars for the rest of his days. A. Square hopes his writings will inspire other individuals in a later time to pursue other dimensions, as he now realizes his knowledge is lost on his hierarchical society.