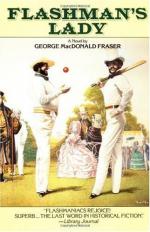 George MacDonald Fraser
This Study Guide consists of approximately 56 pages of chapter summaries, quotes, character analysis, themes, and more - everything you need to sharpen your knowledge of Flashman's Lady.

This detailed literature summary also contains Topics for Discussion and a Free Quiz on Flashman's Lady by George MacDonald Fraser.

Flashman's Lady by George MacDonald Fraser finds Harry Flashman ca. 1900 reminiscing about events in his life in 1842-43, when a disguised pirate takes him and wife Elspeth to raising adventures in Singapore, Borneo, and Madagascar.

A former schoolmate, whom Afghanistan war hero Harry Flashman once bullied, invites him to play in a special cricket match. While Flashy bowls the game of his life, achieving the world's first "hat trick," beautiful wife Elspeth is befriended by rich Don Solomon Haslam. As they mix in society Flashy can find nothing wrong in Haslam's behavior. To Flashy's consternation, a notorious London bookie, Daedalus Tighe, twice presses on him. After being caught in an affair and being unable to lose a one-on-one match with Haslam, Flashy finds two sets of thugs on his trail and his reputation threatened. The Flashmans sail to Asia with Haslam.

In Singapore, Flashy and Elspeth quarrel; she goes on a picnic with Haslam, and Flashy is nearly killed by a Black-face street gang. Rescued, Flashy learns that Elspeth has been abducted; Haslam is the notorious Borneo pirate Suleiman Usman, and James Brooke is a gun-ho fighter of pirates. Flashy has no choice but go along to rescuing the fair maiden. Flashy fails to live up to his Afghan reputation, but J.B. never notices. By being wounded and falling overboard, Flashy survives and is picked up by Haslam's Sulu Queen.

Flashy and Elspeth are reunited; Haslam accepts that they are in love, and gives up his quest for Elspeth's heart. Anchored off the coast of what Flashy believes is British-owned Mauritius, he swims ashore. As a castaway in Madagascar, however, Flashy automatically becomes a slave. A European freedman, Jean Laborde, gives Flashy a long list of survival tactics and promises to look after Elspeth. Flashy becomes the love-slave of lusty, malevolent Queen Ranavalona and is appointed "sergeant-general" in charge of training and drilling her army.

Conspirators induce Flashy to march the Hova Guard away from the city so they can strike, in return for his and Elspeth's freedom. When the coup is uncovered, Flashy undergoes trial by ordeal, survives, and collects Elspeth for a ride to the coast, where a British man-of-war is supposedly anchored. They arrive, pursued by Guardsmen, to find a Franco-British naval operation underway. They sail to Mauritius, where Flashy receives orders to Bombay to help put down the Sikhs. Furious, Flashy tries to resign his commission, but all experienced officers are needed and he goes.

More summaries and resources for teaching or studying Flashman's Lady.