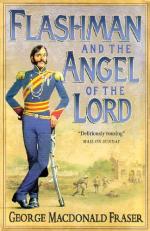 Flashman & the Angel of the Lord: From the Flashman Papers, 1858-59 Summary & Study Guide

George MacDonald Fraser
This Study Guide consists of approximately 68 pages of chapter summaries, quotes, character analysis, themes, and more - everything you need to sharpen your knowledge of Flashman & the Angel of the Lord.

Flashman & the Angel of the Lord: From the Flashman Papers, 1858-59 Summary & Study Guide Description

Flashman & the Angel of the Lord: From the Flashman Papers, 1858-59 Summary & Study Guide includes comprehensive information and analysis to help you understand the book. This study guide contains the following sections:

This detailed literature summary also contains Topics for Discussion and a Free Quiz on Flashman & the Angel of the Lord: From the Flashman Papers, 1858-59 by George MacDonald Fraser.

Flashman & the Angel of the Lord by George MacDonald Fraser follows the adventures of Sir Harry Flashman as he serves against his will as John Brown's military advisor for the assault on Harper's Ferry.

At age 89, Sir Harry Flashman tells about his misadventures after completing service in India, when he wants only to return home to England and be knighted. Indiscretions with two women, however, bring him back to the U.S., where warrants remain for him from ten years earlier under a variety of aliases, particularly Beauchamp Millward Comber. Flashy must reach the British consulate in Washington, but is seized by two sets of fanatics who want him to serve as John Brown's military advisor—one, Crixus and the Underground Railroad, wanting Brown to succeed; the other, Atropos and Kuklos, wanting Brown to fail. Before Flashy can join Brown, he is blackmailed into cooperating with a third interested party—the U.S. Government. Mr. Messervy wants Flashy to thwart the assault on Harper's Ferry or, failing that, to assassinate Brown before he can stand trial.

Doubting that Brown is organized enough to execute a raid and profit from it, Flashy looks only to escape, but is thwarted by the Kuklos' Joe Simmons, his constant shadow. Flashy produces ideal military plans to seize the Ferry without bloodshed and escape swiftly to the hills with the munitions. The plan works brilliantly but Brown then stops leading and all goes bad. The drunken townspeople turn hostile and military forces surround the Ferry. Flashy finds refuge with an enormous, sexually insatiable black woman, Hannah Popplewell, and, when discovered, flees to the engine house, where the final battle is at hand. When Joe, feeling betrayed, is about to shoot Brown, Flashy kills Joe. The military makes short work of the invasion, captures Brown, and turns over Flashy to Messervy, who wants him swiftly returned to England. He asks why Flashy fails in his mission but is philosophical about what lies ahead. Flashy admires Brown's bravery and dignity at the end.

Flashy is surprised to meet Hannah on the train and, more so, to learn that she is a Kuklos agent. She demands to know what has happened to Joe. Since Flashy has been better to her than any man, Hannah lets him slip off the train to evade a trap in Baltimore. Flashy thus misses the ship home and sees England only after adventures to be described in the next packet.

More summaries and resources for teaching or studying Flashman & the Angel of the Lord: From the Flashman Papers, 1858-59.