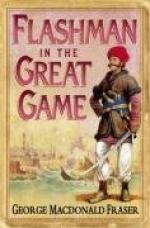 Flashman in the Great Game: From the Flashman Papers 1856-1858 Summary & Study Guide

George MacDonald Fraser
This Study Guide consists of approximately 54 pages of chapter summaries, quotes, character analysis, themes, and more - everything you need to sharpen your knowledge of Flashman in the Great Game.

Flashman in the Great Game: From the Flashman Papers 1856-1858 Summary & Study Guide Description

Flashman in the Great Game: From the Flashman Papers 1856-1858 Summary & Study Guide includes comprehensive information and analysis to help you understand the book. This study guide contains the following sections:

This detailed literature summary also contains Topics for Discussion and a Free Quiz on Flashman in the Great Game: From the Flashman Papers 1856-1858 by George MacDonald Fraser.

Flashman in the Great Game describes Flashy's assignment in India during the Great Mutiny of 1857-58, which took him to palaces, native barracks, embattled garrisons, jungles, and rivers; found him romancing a beautiful but treacherous queen; and forced him numerous times to find a way to narrowly escape death. Despite consistent acts of cowardice, Flashy is knighted and awarded the prestigious Victoria Cross.

Flashy is commissioned by the British Prime Minister, Lord Palmerston, to determine if India is near mutiny. Avoiding assassination by the Russian Count Ignatieff at Balmoral Castle, Flashy learns little at a stopover in Bombay, other than that Jhansi is a rough place. In Jhansi, Flashy is enthralled by beautiful and intelligent Queen Rani Lakshmibai, hears her just grievances, knows he can do nothing of substance to help her, and bides his time, hoping to seduce her. After succeeding, Flashy is nearly garroted by Ignatieff's hired Thugs, but rescued by his old friend, Ilderim Khan.

Disguised as Makarram Khan, Flashy hides from Ignatieff and the Thugs by enlisting as a sepoy (horse soldier) in Meerut. There he serves as Col. Duff Mason's orderly and is one of five sepoys who obey orders and escape a court-martial over ammunition that allegedly offends religious taboos. Flashy is coming home from a sexual adventure when Meerut explodes in Mutiny.

Flashy makes his way to besieged Cawnpore and helps negotiate with Nana Sahib safe passage down the Ganges. Flashy is one of five survivors of Nana's treachery, which concludes with the massacre at Bibigarh and a bloody reprisal. Flashy goes next to Lucknow, where a safe job as Gen. Havelock's aid leads to a nighttime romp through the woods with a deranged Irishman, Kavanaugh, to guide Gen. Campbell in and raise the siege.

Flashy returns to Jhansi to convince Lakshmibai to surrender. Narrowly escaping Ignatieff again, Flashy thinks he has talked Lakshmibai into surrendering and believes she loves him (as he half-loves her), but she double-crosses him, escapes on her own terms, and locks Flashy, who is again wearing native clothes, in a squalid Gwalior dungeon. She releases him in time for the final battle and dies in Flashy's arms. Knocked out, marked as a rebel, gagged, and tied to the muzzle of a British cannon, Flashy nearly goes insane, trying to get someone's attention. He orders the other condemned men to be freed.

Leaving India, Flashy receives the Victoria Cross, which puffs up his ego, and a copy of a tell-all book about his Schooldays as a bully, which he is sure will destroy his reputation.

More summaries and resources for teaching or studying Flashman in the Great Game: From the Flashman Papers 1856-1858.