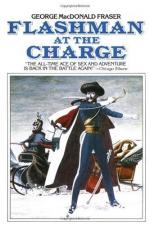 George MacDonald Fraser
This Study Guide consists of approximately 54 pages of chapter summaries, quotes, character analysis, themes, and more - everything you need to sharpen your knowledge of Flashman at the Charge.

Flashman at the Charge Summary & Study Guide includes comprehensive information and analysis to help you understand the book. This study guide contains the following sections:

This detailed literature summary also contains Topics for Discussion and a Free Quiz on Flashman at the Charge by George MacDonald Fraser.

Flashman at the Charge is, ostensibly, the fourth part of the cache of "Flashman Papers" discovered late in the 20th century and published by George MacDonald Fraser. Octogenarian Harry Flashman, retired as a Brigadier-General from the British Army early in the 20th century writes a memorial of his seemingly illustrious career. This novel deals with the Crimean War (1853-54), during which "Flashy" is the only man who participates in all three skirmishes of the fabled Battle of Balaclava, falls prisoner of war to the Russians, and is nearly forced to work on their behalf in the planned Russian invasion of India, but plays a major role in preventing it.

Captain Harry Flashman ("Flashy"), a bully, a knave, and a coward at heart who somehow always blunders into a position to be seen as a hero, does his best to avoid going to the front in the Crimean War by finagling a cushy post on the Board of Ordnance in London. Lord Raglan, Commander-in-Chief of the Army, however, decides this is a waste of his talents, assigns him to his staff, and puts him in charge of educating the German Prince William of Celle. Before long, Flashy and Will head east to deliver orders concerning the siege of Sevastopol.

In the Crimea, Flashy loses his gung-ho ward in the first battle, endures ignominy, and contracts dysentery, but is back in the saddle on 25 Oct. 1854, where he is the only man who takes part in the three phases of the Battle of Balaclava. After "yelling and farting" his way into the Charge of the Light Brigade, trying to get the commander to wheel away form the blazing Russian guns, Flashy is taken prisoner of war into Russia, where he enjoys a luxurious house arrest and learns a great deal about Russian society before the liberation of the serfs. He is reunited with school chum and fellow POW Scud East, a spy and Christian moralist. They overhear plans for a Russian invasion of India and find themselves able to flee safely when peasants revolt and the landlord entrusts his daughter's safety to Flashy (having earlier asked him to impregnate her).

Flashy is recaptured and the sadistic Count Ignatieff, author of the invasion plan, casts him into irons and transports him east of the Caspian Sea to "make propaganda" for Russia among the Afghans. Flashy is broken out of the dungeon of Fort Raim with the rebel chief Yakub Beg and the bandit Izzat Kutebar. He is seduced by Ko Dali's beautiful and tactically brilliant daughter, and rendered fearless and bloodthirsty by hashish given him secretly, commands the firing of rockets at the Russian supply ships holding all the powder and shells needed for the Indian expedition. Flashy hurries to India to report his adventures, hoping to return home to safety in England and a possible knighthood.

More summaries and resources for teaching or studying Flashman at the Charge.

Flashman at the Charge from BookRags. (c)2022 BookRags, Inc. All rights reserved.