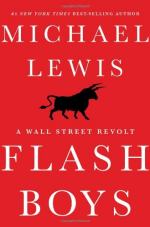 Michael Lewis
This Study Guide consists of approximately 38 pages of chapter summaries, quotes, character analysis, themes, and more - everything you need to sharpen your knowledge of Flash Boys.

Flash Boys, by Michael Lewis, begins in a financial world that has been revamped. In the past, the majority of share trading was funneled through Wall Street and the New York Stock Exchange (NYSE). Michael Lewis points out that the old system is typically what people envision of Wall Street. Images such as one of “thick-necked guys in color-coded jackets standing in trading pits” come to mind. Back then, if investors panicked and wished to sell enormous batches of stock, it wasn’t uncommon for brokers to simply not pick up their phones. The old stock market was based on human limitations. The new stock market, however, has replaced the human element with technological ability. The centrality of the stock exchange has dissolved, as numerous stock exchanges have sprung up in multiple states. Stocks are traded simultaneously in different markets through a click of a button. When an investor places an order, it no longer passes through a broker. Instead, it goes through miles of fiber-optic cables that transmit signals at light speed. Indeed, the new market has broadened the landscape for small enterprises to enter the market and trade. With the expansion of possibilities, new flaws have also appeared. For instance, Royal Bank of Canada stockbroker Brad Katsuyama discovered that nearly all his trades had a predictable result. He lost money when he should have gained. Before he could blink, shares which would have likely profited traded far worse than the original market price. Brad wondered if his computer was damaged. After trial and error, he discovered that it was not a technological glitch at all. I was the new concept of high frequency trading.

High frequency trading firms measure value by unfathomable speed. If an investor’s trade is executed at 10 milliseconds, an HFT firm with a 9-millisecond capacity will intercept the signal and manipulate the price for their benefit. For example, if an investor wants to buy a share of X at $10, a high frequency trader will buy the share for that amount and sell to the investor at $12 before the investor even notices the change. Hungry to have a technological edge, high frequency traders obsessively seek to shave off milliseconds, nanoseconds, even microseconds (millionths of a second) from their transmit time. Due to this technological drive, Wall Street banks, stock exchanges, and online brokerage firms that practice high frequency trading invest millions of dollars in the latest high-speed computers and fiber-optic lines. Characters such as Dan Spivey supervise the construction of these aforementioned lines that cut through cities and rugged terrain in order to achieve the shortest distance between two financial markets. High frequency traders co-locate within the exchanges and collect information about trades before everyone else.

Of course, no human can employ information at those speeds, so Wall Street firms rely on the expertise of computer programmers to generate complicated algorithms to do it for them. Sergey Aleynikov was one such programmer who worked for the large investment bank, Goldman Sachs. Lewis describes Serge as a dutiful employee who rarely questioned his role in facilitating high frequency trading. Rather, he was fascinated by large-scale complex systems and code. The code he helped develop, which was used for HFT, became Goldman Sachs property even though the culture of computer programming depends on collaboration and sharing. When he left his position with Goldman’s code saved to his computer, he was promptly arrested at the airport. He was convicted and sentenced to eight years in federal prison. All the while, Lewis contends, high frequency trading and the theft of investor’s money, retirement saving, and pension funds continues unabated and sanctioned by government regulators.

Outraged by this new “predator” on Wall Street, Brad Katsuyama teamed up with the technologically gifted Ronan Ryan, as well as a host of other talented Wall Street computer programmers and disenchanted stockbrokers to build a new system that removes HFT from the marketplace. In their first attempt, they developed a program called Thor that essentially equalized the time of simultaneous trades by slowing down the faster speeds. If multiple trades are synchronized, high frequency traders find it difficult to intercept the faster trade in order to manipulate the slower one. Thor, however, was limited in its reach. The market was still imbalanced. From here, Brad and Ronan quit their jobs at the Royal Bank of Canada and took up the ambitious project of creating a new stock exchange based on fairness and transparency. The new stock exchange, the Investors Exchange (IEX), successfully facilitates trade without the exploitation of HFT. However, Lewis reminds readers that HFT has not been totally abolished. It still operates in certain areas where unknowing investors are exposed. Nonetheless, Flash Boys serves as an account of a dozen or so individuals on Wall Street who were fed up with the injustice. They were out their energy, time, and money to fix the crisis, when most saw HFT as a lucrative opportunity. Lewis argues that the injustice that cheats investors is the same injustice that locked Sergey Aleynikov away in prison and that undermines the entire financial system.

More summaries and resources for teaching or studying Flash Boys.