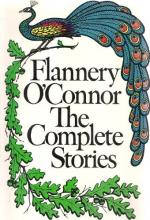 +Chapters Summary and Analysis
"The Geranium"
"The Barber"
"Wildcat"
"The Crop"
"The Turkey"
"The Train"
"The Peeler"
"The Heart of the Park"
"A Stroke of Good Fortune"
"Enoch and the Gorilla"
"A Good Man is Hard to Find"
"A Late Encounter with the Enemy"
"The Life You Save May Be Your Own"
"The River"
"A Circle in the Fire"
"The Displaced Person"
"A Temple of the Holy Ghost"
"The Artificial Nigger"
"Good Country People"
"You Can't Be Any Poorer Than Dead"
"Greenleaf"
"A View of the Woods"
"The Enduring Chill"
"The Comforts of Home"
"Everything That Rises Must Converge"
"The Partridge Festival"
"The Lame Shall Enter First"
"Why Do the Heathen Rage?"
"Revelation"
"Parker's Back"
"Judgment Day"
Free Quiz
Characters
Objects/Places
Social Concerns/Themes/Characters
Themes
Style
Quotes
Adaptations
Topics for Discussion
Literary Precedents
Copyright Information
Order our The Complete Stories of Flannery O'Connor Study Guide

Literary Precedents for The Complete Stories of Flannery O'Connor

Flannery O'Connor
This Study Guide consists of approximately 66 pages of chapter summaries, quotes, character analysis, themes, and more - everything you need to sharpen your knowledge of The Complete Stories of Flannery O'Connor.

Since O'Connor read so widely, one can find without real effort evidence that she was influenced by Henry James, James Joyce, Sherwood Anderson, and any of the long list of modern short story writers. She owned many collections by a number of fiction writers, in addition to six titles by William Faulkner, nine titles by Joseph Conrad, and fifteen by the French Catholic author, Francois Mauriac. She owned and read works by a number of different contemporary theologians and philosophers as well as literary critics.

Everything that enlarged her thought was grist for her mill, along with any number of examples from popular culture that created the raw material of the society on which she could work, transmuting it into a testimony to Christ or better, to His absence from the scene.