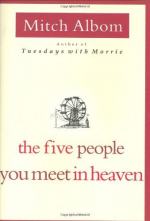 The Five People You Meet in Heaven Summary & Study Guide

Mitch Albom
This Study Guide consists of approximately 36 pages of chapter summaries, quotes, character analysis, themes, and more - everything you need to sharpen your knowledge of The Five People You Meet in Heaven.

The Five People You Meet in Heaven Summary & Study Guide includes comprehensive information and analysis to help you understand the book. This study guide contains the following sections:

This detailed literature summary also contains Topics for Discussion and a Free Quiz on The Five People You Meet in Heaven by Mitch Albom.

The novel The Five People You Meet in Heaven was published in 2003 and is about a character named Eddie, who is a crippled veteran of World War II. Life has been hard for him, beginning with his birth to an abusive drunk who earns his living maintaining the equipment for an amusement park named Ruby Pier. The only bright and redeeming feature of Eddie's growing-up years is his mother, who loves him unconditionally but does not prevent his father from neglecting him, beating him and abusing him verbally and emotionally.

The story begins with Eddie's death at eighty-three years of age and then through flashbacks reveals his entire life. He wears a badge that reads "Eddie Maintenance." The children call him that, as if Maintenance were his last name. He is in charge of the rides at Ruby Pier along with his assistant, Dominguez. Eddie takes pride in the accident-free safety record at the Pier. In the first chapter, readers learn that a young man has lost his car keys, and eventually the keys cause the most popular ride, Freddy's Free Fall, to malfunction. Eddie directs the rescue of riders whose cart has tilted. The ride starts again. Eddie sees that the cable has been shredded, but he is unable to make himself heard in time to prevent one of the carts from falling towards a little girl. He leaps to save her, and that is the last thing he remembers on earth.

The remainder of the novel is told in alternating present-tense encounters in Heaven and flashbacks that are organized around Eddie's birthdays. He is told that he will meet five people in Heaven, and the purpose of those meetings is to help him understand his life on earth. The first person he meets is the Blue Man from the freak show on the Pier, who died when Eddie was eight years old. The Blue Man reveals that eight-year-old Eddie was responsible for the Blue Man's death when he ran in front of the car the Blue Man was driving. In Heaven, the man tells Eddie his life story, and the lesson Eddie is to learn from this first person is that there are no random acts. All lives are interconnected, and fairness does not govern life or death.

The second person Eddie meets is his captain from the war. Four of his men, including Eddie, were captured with him in the Philippines. The captain was killed by a landmine as they were escaping after several months as captives of brutal enemy soldiers. Eddie was sure that there was a child in a tent he had torched, and he was going into the fire to rescue it. As he headed into the fire, Eddie's leg was shot, leaving him a resentful cripple for the rest of his life. His chief resentment is an unproductive life spent maintaining rides in an amusement park as the result of the war and the injury. He discovers in this second encounter in Heaven that his captain shot him in order to save him from being burned in the tent. He comes to accept the act of the captain, who was determined to leave no one behind. The lesson he learns is that no one dies for nothing and that when you sacrifice something precious, such as a leg, you always gain something. Eddie just doesn't know yet what he has gained.

The third person Eddie meets is a woman named Ruby, for whom Ruby Pier was named long before Eddie's time. He meets her near a diner, where Eddie is shocked to find his father. She takes him to a scene in his family's kitchen where an old friend of his father's, Mickey Shea, attempts to assault his mother. His father comes home and chases Mickey with a hammer but ends up rescuing him from an attempted suicide-by-drowning off the pier. Ruby tells Eddie that his father is angry but that he can't let an old friend die without trying to save him. Mickey befriended Eddie's father in times of need. Besides, Mickey has just lost his job because of his drinking and is drunk at the time. His father gets them both out of the water, but he is unable to get himself up from the beach for several hours. He dies of pneumonia a few weeks later, and Eddie ends up working on the Pier to save his father's job. Once his father dies, he stays on the job, and he and Marguerite move into the same apartment house where he had grown up. The lesson he learns from this encounter is taught by Ruby. She tells him that anger is self-destructive and that he must forgive. Eddie goes back to the diner and kneels beside his father, who is not able to hear him or speak to him because he has already moved on in Heaven. Eddie tells him that he has forgiven him and is letting his resentment go.

The fourth person Eddie meets is his wife, Marguerite. Their relationship was a rewarding and fulfilling one although it went through a bad period when Eddie lost money at a racetrack. The money would have paid for the adoption of a child that Marguerite wanted very much, since she was unable to bear children. He called her from the racetrack to tell her that he was winning, and she was angry and begged him to come home. In retaliation for her anger, he foolishly gambled away all he had won. She was remorseful that she was angry when he called and drove to the racetrack to tell him so. On the way, she had an accident and was seriously injured. Eventually, they got past the damage that had been done, and for the last three years before she died of a brain tumor, they were once again close and supportive. Now they have a happy reunion in Heaven, organized against the backdrop of several weddings from different countries. The lesson that he learns from this fourth encounter is that lost love is still love. It just takes a different form. Although life has to end, love doesn't.

The fifth person Eddie meets is a little girl, named Tala, whom he tried to rescue in the burning tent in the Philippines in the war. She asks him to take a stone and wash her as her mother had done. When he does, all the damage done by the fire is washed away. She asks him why he was so unhappy on earth, and he tells her it was because he never accomplished anything. She tells him that he was where he was supposed to be, keeping children safe on the rides for her sake. She also tells him that he did, in fact, save the little girl from the falling cart and that as he died, the hands he felt in his were her own, Tala's. She was bringing him to Heaven to keep him safe, she tells him. At last, Eddie feels peace. Eddie is then transported back to Marguerite to spend eternity with her at home in Heaven.

The Five People You Meet in Heaven from BookRags. (c)2022 BookRags, Inc. All rights reserved.