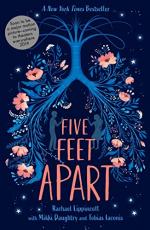 Rachael Lippincott
This Study Guide consists of approximately 49 pages of chapter summaries, quotes, character analysis, themes, and more - everything you need to sharpen your knowledge of Five Feet Apart.

The novel opens on high school senior Stella Grant decorating her hospital room with drawings made for her by her older sister Abby. Stella has checked into the hospital with a sore throat and a fever, which is potentially dangerous because she has cystic fibrosis (CF). Stella is worried about how this hospitalization will affect her parents, who have recently divorced. She feels like she has to stay alive for them and hide the truth about the severity of her symptoms. Stella is also upset because she is missing her senior trip to Cabo with her best friends, Camila and Mya. Stella prepares to make a video for her popular YouTube channel, on which she keeps a record of her life and her illness. She learns that her other best friend, Poe, a teenage boy who also has CF, is also in the hospital.

Will Truman has also just checked in. He has CF as well, and he is annoyed with his mother for dragging him from hospital to hospital in search of the best treatment. Will turns 18 in two weeks and he plans to cease treatment at that point and travel the world instead. Will has a bacterial infection, B. cepacia, that has caused him to be removed from the lung transplant list. Will sees Stella and is intrigued by her. Meanwhile, Stella notices some irritation around her abdominal gastrostomy tube (G-tube).

Will watches some of Stella's YouTube videos, including one in which she is singing with Abby. He sneaks up to the hospital's roof, and finds that he can see into Stella's room from up there. He begins having a coughing fit, and Stella sees this. She runs up to the roof to check on him and chastises him for being so reckless. Stella convinces Will to follow the treatment regimen the doctor has recommended, and organizes his medication for him. They begin talking to each other about their lives and the things they have in common because of their shared illness. They grow closer emotionally, but are forced to maintain a six foot distance between them at all times so that Will does not infect Stella with B. cepacia. Will tells Stella about his plan to travel the world.

Having learned more about Stella, it dawns on Will that her sister Abby has not been in her recent YouTube videos; he realizes something must have happened to her, and asks Stella if she died. She confirms this. Abby died cliff diving during a trip to Arizona that Stella was supposed to accompany her on. Stella feels guilty she was not with Abby when she died.

Stella's doctor tells her that her G-tube will have to be replaced because the area around it is infected, and Stella is frightened to undergo the procedure. Will sneaks in to see Stella before the operation and sings a song to her that Abby used to sing. One of the nurses tells Will to stay away from Stella because of the potential for infecting her with B. cepacia, and he tries to comply, but Stella refuses to let him go. She tells him that CF has taken too much from her in the past, and she will not let it take him too. In fact, she is reclaiming one foot of space, and she will now only stay five feet away from Will. They go on a romantic date inside the hospital and realize they are falling in love with each other.

Stella organizes a surprise birthday party for Will on his birthday, with his friends and hers. Poe cooks them all dinner and they have a wonderful time before a nurse catches them and sends them back to their rooms. During the night, Poe's lung collapses and he dies, as Stella watches helplessly from the hall. The next morning, Stella goes on the hospital's roof and observes the holiday lights in the park a few miles away. She decides she wants to see them up close, so she goes to find Will and they leave the hospital together. In the park, they make snow angels and glide out onto a frozen pond. Stella receives a text message that she has been approved for a lung transplant and she needs to return to the hospital immediately. She does not want to go because she knows that she will not be permitted to see Will if she undergoes the procedure; the risk of infection will be too great. Will gets the same text message, however, and demands they go back. Just then, Stella falls through the ice and nearly drowns.

While unconscious, Stella imagines she sees Abby, who tells her she must live, at all costs. Will pulls Stella from the water and gives her CPR, nearly dying in the process himself. Back at the hospital, Will begs Stella to take the lung transplant, and she reluctantly agrees. When she wakes up after the procedure, she finds that Will has decorated the trees outside her window with holiday lights. He is standing on the other side of the glass and he calls her on the phone to tell her that he knows it is not safe for them to be together, so he is saying goodbye. He leaves.

Eight months later, Will is in the airport on his way to Brazil, having convinced his mother to give him a little more freedom. He watches Stella's latest YouTube video and marvels at how healthy she looks. Suddenly he hears her laugh; she is there at the airport, just across the room.

Stella is going on a trip to see the Sistine Chapel, something she always planned to do with Abby. Her parents have reunited. She sees Will across the room at the airport and walks toward him, stopping exactly five feet