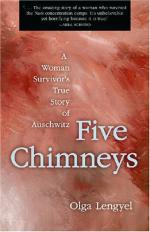 Olga Lengyel
This Study Guide consists of approximately 30 pages of chapter summaries, quotes, character analysis, themes, and more - everything you need to sharpen your knowledge of Five Chimneys.

This detailed literature summary also contains Topics for Discussion and a Free Quiz on Five Chimneys: The Story of Auschwitz by Olga Lengyel.

Olga and Miklos Lengyel are living and working in Cluj, the capital city of Transylvania, in 1944. They have heard reports of the atrocities being carried out by the Germans; Olga says that she doesn't really believe it. She says that there are many clues that the stories are true - including the fact that a German military official who is billeted in their home tells them. This German says that his own family is angry at him because he doesn't send as much loot home as others. Olga says that it's simply impossible to believe all the stories.

Miklos, who is sometimes critical of the Germans, is arrested. When Olga goes in search of him, she discovers that he's about to be deported and that she is welcome to go with him. She agrees, believing that her family can withstand anything as long as they remain together. Her parents and two young sons go along on the horrendous trip and eventually arrive at their destination - Auschwitz. They all survive the trip but Olga, believing she's saving her young son the hardships of manual labor, insists that both her sons are younger than twelve and both boys along with Olga's mother are taken away. She later learns that the chimneys, which she is told are bakeries, are crematories and that her mother and sons were killed soon after their arrival.

Olga is subjected to many hardships but comes to realize that she must survive in order to tell the world about the atrocities suffered at the hands of the Germans. Those selected for extermination are picked seemingly at random by several of the German officials. Olga works as a health official and is sometimes working for an underground resistance movement. Eventually, the movement secures enough explosives to blow up one of the crematories through the help of people like Olga.

Olga eventually learns that her husband is at another camp and she manages to travel there as a nurse. He offers her encouragement and reminds her that they must survive in order to tell the world what happened to the victims. She later learns that he was killed during the evacuation of the camp.

Olga and others are forced by the Germans to evacuate the camp and to march for days. One morning, she and two friends manage to slip away, evading the Germans who chase them. Olga is captured again, briefly, and kills a Nazi as she escapes again. She has to swim a brutally cold river to make her final escape into the path of the advancing Russian army.

Olga completes her story by recounting an event in December of 1944 when the Germans, deciding there were too many children in the camp who had been forcibly removed from their homes, plans a mass extermination of these youngsters. Lacking gasoline to burn them or ammunition to shoot them, the youngsters are "bathed" in icy water and most die of exposure.