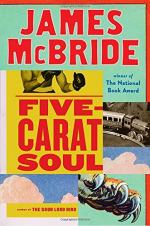 McBride, James
This Study Guide consists of approximately 63 pages of chapter summaries, quotes, character analysis, themes, and more - everything you need to sharpen your knowledge of Five-Carat Soul.

The following version of this book was used to create this study guide: McBride, James. Five-Carat Soul. Riverhead Books, 2017.

Five-Carat Soul consists of seven short stories. In the first, “The Under Graham Railroad Box Car Set,” a toy collector named Leo Banskoff seeks a model train designed by Robert E. Lee just before the Civil War as a gift for his son Graham. Leo finds the train's owners in Queens, New York, a Rev. and Mrs. Hart. Mrs. Hart tries to give the train to Leo because she and her husband are devoutly religious and uninterested in material things. He insists on giving them $90,000. Leo is unsatisfied with his remarkable find, however, because the Harts are reluctant to tell Leo how the train came into their possession. He wants the train's story. Once he has all but given up, Leo tracks Rev. Hart to a hip hop club in Brooklyn. Inside, Leo hears Rev. Hart perform a rap about the evils of slavery and the punishment God continues to mete out upon mankind for these evils. Leo walks away from the performance feeling redeemed.

“The Five-Carat Soul Bottom Bone Band” is divided into four shorter stories narrated by a young teen named Butter who lives in an impoverished Pennsylvania town called The Bottom. In the first, “Buck Boy,” the young titular character is shot dead by a shopkeeper he is attempting to rob. The community leader Rev. Jenkins stages a protest that attracts nationwide attention, but Butter knows that Buck Boy was a criminal and did not deserve all of the attention being lavished on him in death. In the second story, “Ray-Ray's Picture Box,” Butter's friend Dex's little brother Ray-Ray, who has a mental deficiency, is manipulated by a boy named Bunny into handing over a box of pornography his father keeps in their basement. Bunny sells the pictures, but ultimately buys them back and returns them. Dex and Ray-Ray's father moves his family out of town and Butter does not see them for years. When he is reunited with Dex, he learns that Ray-Ray has a brain tumor.

In the third story, “Blub,” Butter's friend Blub has a crush on Butter's sister. When she fails to notice him, Blub and Butter drift apart. A few months later, Butter learns that Blub and another boy are being charged with murder. Blub's attorney asks Butter to be a character witness, and he tells a story at the trial about Blub burying his sister's dead cat so she would not be traumatized by seeing its body. Blub is sentenced to 40 years in prison and the other boy receives the death penalty. The fourth story, “Goat,” is about Butter's friend Goat who is an excellent runner. Their teacher, Miss McIntyre, wants Goat to take part in local track meets, but Goat needs a copy of his birth certificate to do so. Goat's mother does not have his birth certificate because he was born in a house, not a hospital, and she is illiterate and unable to request a copy. Miss McIntyre writes the request for her.

In “Father Abe,” a five-year-old child named Abraham Henry Lincoln seeks his father, who he believes to be Abraham Lincoln, at the end of the Civil War. Instead, he stumbles upon the 9th Louisiana Colored Infantry where he meets a soldier named Abe Porter. Porter tells young Lincoln that they have just won their freedom, and Lincoln asks what that means. Porter is unable to respond because he is suddenly aware he does not know what freedom means or what his situation as an African American will be after the war. He gives a speech to his regiment about the importance of remembering the fallen soldiers that fought with them, then deserts with young Lincoln.

In “The Moaning Bench,” five people sit before the door to hell where their souls are judged by its Gatekeeper. The Gatekeeper taunts them until the one speaks up angrily. He is a boxer named Rachman Babatunde, and he challenges the Gatekeeper to a fight. The Gatekeeper acquiesces and says he will release all of their souls if Babatunde wins. Babatunde does win, but the Gatekeeper sends him to hell anyway. The other four object and choose to walk through the door to hell rather than return to Earth. The scene shifts to Madison Square Garden where Babatunde has just won a fight. He approaches these same four people in the audience, though they no longer recognize each other. Babatunde says that he surrenders his evil to God “who washes it clean” (188).

In “The Christmas Dance,” a student named Herb Melton seeks information about an all black regiment in World War II from its last two surviving members, a mailman and a retired judge. The mailman, Carlos, tells Herb about the bravery exhibited by their friend Clifford Johns who sacrificed his life for his unit. When they discovered Johns’ body, he had a letter to his wife Lillian in which he promised to take her dancing every year on Christmas Eve. To honor him, Carlos and the judge take Lillian Johns dancing every year in his place.

In “The Fish Man Angel,” Abraham Lincoln is in the White House stable when he overhears a stable hand named Simmie talking to his son. Simmie tells his son about the mythical Fish Man Angel who visited the boy's mother while she was alive and enslaved. The Fish Man Angel promised Simmie's son's mother that her child would be free, and said four magic words to make it so, “...here, thenceforward, and forever-more...free” (242). Lincoln places these words in the Emancipation Proclamation, declaring the slaves freed and fulfilling the creature's prophecy.

“Mr. P & the Wind” is narrated by a lion called Get Along, Go Along who lives in a zoo. One day a zookeeper named Mr. P arrives and the animals discover that he can communicate with them telepathically. One night, Mr. P lets the animals out of their cages and they convene in the monkey house. A gorilla called Rubs Her Head tells a story about her previous owner talking to the Wind, which the animals revere as a god-like being. Mr. P asks Rubs Her Head to help him speak to the Wind and she reluctantly agrees. A few days later, she gets sick and dies. Wracked with guilt, Mr. P demands that Get Along kill him. He kills Get Along's friend, a jaguar in a nearby cage, to force Get Along to retaliate. Get Along kills Mr. P and is immediately put down by security. He awakens and finds he has become the Wind. Mr. P is there, and so is the jaguar and Rubs Her Head.

More summaries and resources for teaching or studying Five-Carat Soul.