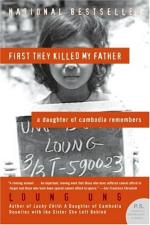 Ung, Loung
This Study Guide consists of approximately 69 pages of chapter summaries, quotes, character analysis, themes, and more - everything you need to sharpen your knowledge of First They Killed My Father.

First They Killed My Father Summary & Study Guide includes comprehensive information and analysis to help you understand the book. This study guide contains the following sections:

This detailed literature summary also contains Topics for Discussion on First They Killed My Father by Ung, Loung.

The following version of this book was used to create the guide: Ung, Loung. First They Killed My Father. HarperCollins, 2000.

First They Killed My Father is divided into 28 chapters, including an epilogue, which this guide groups into seven sections of four chapters each. Each individual chapter has a brief title which informs the reader of the main topic or event dealt with therein. Each section therefore contains about four larger events or topics discussed by the narrator, and told as a chronological account of the events following the evacuation of Phnom Penh in 1975. Overall, the book spans the years 1975-1980, with the epilogue discussing the author’s life in the present day.

Section 1 of First They Killed My Father describes the narrator’s life in Phnom Penh and her familial relations, then proceeds to outline how these relations change as her family is forced to evacuate their home town and seek safety in the countryside, due to the Khmer Rouge takeover. Section 2 continues to follow the Ung family’s journey into the countryside and their frequent relocation from village to village, whereby they seek to escape Khmer Rouge suspicions and survive on very little food.

In Section 3, the Ung family finally settles in Ro Leap, a village closely monitored by the Khmer Rouge soldiers. Keav, Meng, and Khouy are eventually relocated to other work camps, and Keav dies of her illness in her camp after only a little while. Section 4 describes the further atrocities experienced by the remaining Ung family members, with Pa being finally targeted by the soldiers and executed, and Ma eventually sending Kim, Chou, and Loung away to different camps in her efforts to spare them the same fate as their father.

In Section 5, the Ung family members see each other only a few more times before Ma and Geak are executed as well, leaving Loung devastated and full of rage. Eventually, the Youn invade Cambodia, and Kim, Chou, and Loung find each other again while fleeing from their respective camps which are under fire. Section 6 describes their adoption into two different foster families, one after the other, in order to survive their difficult life in the Pursat City refugee camps, with Loung watching the execution of an imprisoned Khmer Rouge soldier and the Ung siblings finally being reunited as Meng and Khouy make their way to the city.

Section 7 is the final section of this book, wherein the siblings return to their mother’s relatives’ village, and Meng decides to bring Loung with him on his journey to America. The chapter titled “Epilogue” describes the author’s life in America and recounts what happened to the other members of her family after the war. The book therefore traces one family’s experiences through a terrible time of war in their home country, told from the perspective of a girl who is five years old at the start of the narrative.

More summaries and resources for teaching or studying First They Killed My Father.

First They Killed My Father from BookRags. (c)2022 BookRags, Inc. All rights reserved.