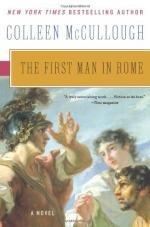 Colleen McCullough
This Study Guide consists of approximately 46 pages of chapter summaries, quotes, character analysis, themes, and more - everything you need to sharpen your knowledge of The First Man in Rome.

The First Man in Rome Summary & Study Guide includes comprehensive information and analysis to help you understand the book. This study guide contains the following sections:

This detailed literature summary also contains Related Titles and a Free Quiz on The First Man in Rome by Colleen McCullough.

The novel begins with Marius, lacking political distinction and seemingly at the end of his career, forming an alliance with the Caesar family in marriage to their older daughter Julia. With his alliance to the Caesars, Marius gains the political nobility that he needs to attempt to become consul. While in Africa fighting under his rival Metellus, Marius meets with a prophetess who informs him that he will be consul seven times and become the First Man in Rome. After receiving this news he returns to Rome and is elected consul. He takes as his assistant a young man named Sulla.

Sulla is from one of the oldest and most noble families in Rome, though without any money. He is forced to live with his stepmother and mistress. After a meeting with Julilla, the younger daughter of the Caesar's, she gives him a grass crown, whereupon Sulla decides that he must try to rise to political distinction. After murdering his stepmother and mistress, he inherits their fortunes and becomes a senator and assistant to Marius.

Marius relieves his rival of command in Africa and pursues the war against Numidia. He wins the war after Sulla captures the Numidian king Jugurtha. He is elected consul again and is tasked to repel the German threat. Several Roman armies led y notable Patricians have already been destroyed by the German army. Needing troops, Marius recruits the poor, a decision that threatens and angers the Patricians. Marius eventually defeats the Germans after several years, all the while continuing to be elected consul.

After the defeat of the Germans, he returns to Rome where his political opposition has been working against him. The Patrician class, thinking that Marius is an upstart and dangerous man, has been maneuvering to oust him from power. Marius, believing that the only way to save Rome is to improve the lot of some of the poor, introduces several bills into the Senate which anger and frighten the Roman upper classes. Marius uses one of his clients, Saturninus, to introduce these bills.

Eventually the Patrician senators force Marius to renounce some of the elements in the bill that Saturninus has helped him pass. Saturninus, feeling betrayed by Marius, begins to start to use the power of the mob to oppose both Marius and the Patricians. Eventually he tries to use the masses to lead an uprising against the Senate and to have himself declared king. Marius is called in to put down the revolt and to restore order. The novel ends with Marius in full control of Rome and the undisputed First Man in Rome.

More summaries and resources for teaching or studying The First Man in Rome.

The First Man in Rome from Gale. ©2005-2006 Thomson Gale, a part of the Thomson Corporation. All rights reserved.