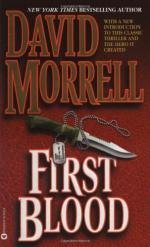 First Blood is the debut novel by writer David Morrell. First Blood is about a Vietnam veteran, Rambo, who is travelling across the country alone. Rambo becomes wary of the small town sheriffs who are constantly forcing him to move on due to his appearance and lack of employment. Rambo decides to make a stand in Kentucky against small town sheriff Wilfred Teasle. However, in making his stand, Rambo becomes the most wanted man in the state. Rambo uses the skills he was taught in the Green Berets to fight Teasle and his deputies, but neither man will allow his pride to let him stop, to admit defeat, despite mounting losses. First Blood is a novel about war, about choosing sides, and about the gray areas that make it difficult for either side to be a clear winner.

Rambo knows the moment that the police car pulls up what is about to happen. It has happened to him fifteen times before in other small towns. The sheriff offers Rambo a ride and politely drops him off outside the city limits, making it clear that he is not welcome in this town. Rambo, however, tired of being treated like he is less than a civilian with the same rights as everyone else, walks back into town and stops in a diner to pick up some lunch. Before Rambo has been there long enough to make his order, the sheriff returns. Sheriff Teasle allows Rambo to get his order, but then drives him back outside the city limits and again warning him not to return.

Rambo has grown tired of being treated in this fashion. Rambo is a Vietnam War veteran who spent time in a prisoner of war camp. Memories of his time in the camp and his subsequent escape haunt Rambo and he refuses to allow someone like Teasle to treat him with such disrespect. For this reason, Rambo returns to town. Teasle spots him quickly and arrests him when Rambo refuses to get into the squad car a third time.

Rambo is arraigned on vagrancy and resisting arrest charges and is given a thirty-five day jail sentence. Teasle takes Rambo back to the jail and instructs him to strip so that he can be searched. Although Rambo is weary of the small and wet jail cells, he submits to everything Teasle wants, including the search and a shower. However, when Teasle begins to cut Rambo's hair and attempts to shave his beard, Rambo cannot bear the similarities to his time in captivity in Vietnam. Rambo begins to panic. When a deputy comes close to him with a straight razor, Rambo takes it from him and cuts him across the abdomen.

Rambo manages to escape the jail in the chaos that follows the cutting of the deputy. Rambo steals a motorcycle and races into the mountains. Rambo is pursued, but he manages to climb up into the hills with the motorcycle to an area the squad cars cannot reach. Teasle quickly takes charge of the search, insisting that he and his men move out immediately in pursuit despite the impending approach of darkness so that he can be in charge of the situation when the state police arrive. As Rambo moves through the unfamiliar hills, naked and alone, he manages to find help from a still owner while Teasle and his deputies camp out to wait for daybreak.

In the morning, Teasle and his men follow Rambo's tracks, catching up to him quickly with the use of tracking dogs. However, Rambo is smart and desperate. Rambo manages to escape down the far side of a cliff, taking out an entire helicopter. Rambo then traps Teasle and his men on the cliff side, taking out the tracker and his dogs. Rambo then hunts down the sheriff and his deputies, managing to kill everyone except Teasle.

Teasle survives his nightmare in the woods to lead the state police back after Rambo. After trapping Rambo in a cave, the state police begin to think it is over, but Teasle knows better. Rambo has escaped and stolen a car. Teasle is waiting for him and they begin a gun battle in the streets. Teasle and Rambo shoot one another fatally, but continue to battle until both are dead.