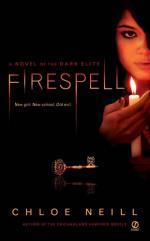 Chloe Neill
This Study Guide consists of approximately 39 pages of chapter summaries, quotes, character analysis, themes, and more - everything you need to sharpen your knowledge of Firespell.

Firespell tells the story of 16-year-old Lily Parker's move to an elite Chicago boarding school, her encounter with the magical teenagers who keep the city safe, and her realization that she may be one of them.

At the opening of the novel, Lily Parker learns that her parents are sending her to an elite boarding school in Chicago while they take over research positions in Munich, Germany. Lily isn't excited about leaving her hometown of Sagamore, New York, but her parents assure her that St. Sophia's will be the best place for her while she's away. The school itself is ominously gothic, filled with spoiled girls whose parents have funded their every whim. Lily is sure she won't fit in until she meets her suitemate, Scout Green. With her bleached blonde bob and silver nose ring, Scout doesn't look like the average St. Sophia's girl, but the pair hit it off immediately, bonding over their mutual dislike for the "Brat Pack," a group of popular, spoiled snobs who mercilessly tease and torment the rest of the school body. On her first night at St. Sophia's, Lily witnesses Scout receive a mysterious phone call and then disappear into the night. When she returns to the dorms in the early morning hours, she's visibly exhausted and covered with bruises, yet she won't reveal what she had been doing.

As the days pass, barely a night goes by that Scout doesn't receive a mysterious phone call in the night. Tired of waiting for her new best friend to fill her in, a worried Lily decides to follow Scout, wherever she's going. She reaches a dead end the first time that Lily follows her, coming up to a massive iron door too heavy to open on her own, which means that when Scout left the school grounds, she had help from the outside. The second time, Lily witnesses Scout racing down the limestone hallways being chased by mysterious hooded figures. Scout warns Lily to get away, but Lily isn't able to before the hooded figures catch up to her. One of the figures, a dark-haired teenage boy, unleashes a green fireball from his hands that knocks Lily to the ground, unconscious. Lily wakes the next morning in the hospital, surrounded by her friends: Scout, Michael, and Jason. The threesome finally tells Lily the secret they've been hiding: they're all Adepts, magical teenagers with special powers. When Adepts turn 25, their magical powers begin to fade, and the only way to keep their strength is to suck the souls from weak humans, becoming "Reapers." Scout, Michael, and Jason are all part of an enclave of Adepts fighting against Reapers because they believe it is inhumane to kill innocent humans just so magical people can keep their powers. The hooded figures chasing them down the hallway, a pair of Reapers, are fighting back from the protective spells Scout and her friends place over their potential victims. Lily, caught in the crossfire, has been hit with a firespell, which permanently marked her in the Reapers' books.

Overwhelmed by this new information, Scout decides to befriend the Brat Pack and live like a normal teenager rather than live her life in the battle between good and evil, Adepts and Reapers. All goes well until Lily suddenly realizes that she has the power to control the brightness of the lights in rooms. Lights dim when Lily is relaxed and brighten when she feels upset, keeping perfect time with her heartbeat. At that moment, Lily knows she cannot ignore what she is: Adept. When Scout mysteriously disappears, her room ransacked, Lily knows that she is the only one who can help save her. She convinces the rest of the Adepts in Scout's enclave to band together to fight against the gang of Reapers that kidnapped her best friend. Working together, the Adepts manage to track down the Reaper enclave, locate Scout within the barracks, and free her. Before they escape to safety, however, a battle between Adepts and Reapers shakes the walls, and Lily realizes that, like the Reaper who first struck her down, she has the power of firespell as well. The novel ends with Scout safely returned to her dorm room, the Reapers temporarily halted, and Lily coming into her own as a magical teenager. The novel is open-ended, thus providing a perfect segway into the rest of the books in the series.

More summaries and resources for teaching or studying Firespell.