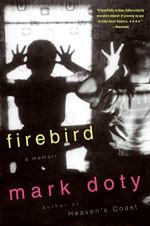 Doty, Mark
This Study Guide consists of approximately 47 pages of chapter summaries, quotes, character analysis, themes, and more - everything you need to sharpen your knowledge of Firebird.

The following version of this book was used to create this study guide: Doty, Mark. Firebird. Harper Collins. 1999. First Edition. In first person narration, the author (an award-winning poet) uses evocative language and a sequence of metaphors to evoke his experience of exploring the early years of his life. Narration throughout the book is written in present tense: for the purposes of clarity and full understanding, however, this analysis will use PAST tense to delineate events taking place in the author's past.

The book begins with a prologue, in which the author introduces his central metaphor - the idea that the experience of exploring memory is, in some ways, like the experience of visually exploring a particular type of artistic representation of a house. That representation, a so-called “perspective box,” is constructed in such a way that, when looked at from a “normal” perspective, it seems distorted, but when looked at through a set of particularly shaped lenses, it seems to be perfectly shaped and proportioned. As the prologue concludes, the author describes a sequence of images that might be seen if such a house had been constructed as a representation of his life.

The author then begins narration of a sequence of situations and experiences that he portrays as being influential on his life and development, both literally and metaphorically. His primary interest lies in memories of his parents – his distant father, who moved from job to job and community to community for reasons that the author discovered relatively late in life; and his troubled mother, whose bouts of despair and frustration led her to explore various means of escape, including alcoholism. The author also considers the presence and influence of several other women in his life, many who were real (including an elementary school teacher who introduced him to the arts) and some who were elaborate public personas (including the tap-dancing evocation of a character that appeared on a popular brand of bread). There were also the women who appeared on movie screens and who sang popular songs, whose lives and ways and insights were generally more interesting to him (and felt truer) than any of the activities enjoyed by other boys. All this, the author writes, led him to a place of feeling both different and separate from others. At times, he says, he found ways to make himself fit in, or at least be accepted. At other times, he adds, he set out to make himself as different as possible, to accept that difference, and find ways to celebrate it. This, he comments at one point, seems to have been the way of a great many men like him: male homosexuals who took being rejected as an opportunity to define their own individual identities and values.

The author also writes of how, over time, and as he matured into young adulthood, his relationship with his parents became increasingly fraught, and increasingly tense, to the point where his mother, increasingly drunk and increasingly aware that her son is a homosexual, pulled his father’s gun on him. The author was not shot, but portrays himself as nevertheless being psychologically and emotionally wounded by the idea, and the image, that his mother hated him enough to at least threaten to kill him.

In the final sections of the book, the author describes his mother’s death from liver disease caused by her alcoholism, and also describes meetings with his father that at one point were conciliatory but at other points became confrontational. Lastly, he writes about an encounter with what he (and many others) regarded as a manifestation of the spirit of the Virgin Mary. He uses his description of that encounter as a springboard into contemplation of the archetype (or universal image) of “the mother,” and gently draws a contrast between the purity and self-sacrifice associated with the Virgin (widely regarded as the ideal “mother”) and his own more troubled, and more emotionally violent, mother.

More summaries and resources for teaching or studying Firebird.