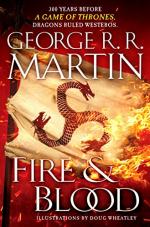 But Aegon Targaryen took Balerion up high, through the clouds, up and up until the dragon was no bigger than a fly upon the moon. Only then did he descend, well inside the castle walls. On wings as black as pitch Balerion plunged through the night, and when the great towers of Harrenhal appeared beneath him, the dragon roared his fury and bathed them in black fire, shot through with swirls of red.
-- Archmaester Gyldayn (Aegon's Conquest)

Importance: This is the first time that Aegon rides a dragon into battle. It depicts the splendor and terror of the dragons.

The Iron Throne was forged with fire and steel and terror, it is said, but once the throne had cooled, it became the seat of justice for all Westeros."
-- Archmaester Gyldayn (Three Heads Had the Dragon—Governance Under King Aegon I)

Importance: After Aegon conquered Westeros, he created a throne out of the swords that all the lords of the realm had laid at his feet. The throne is...