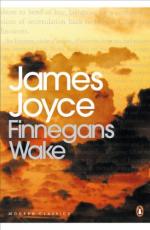 James Joyce
This Study Guide consists of approximately 34 pages of chapter summaries, quotes, character analysis, themes, and more - everything you need to sharpen your knowledge of Finnegans Wake.

This is the first character to appear in the story. He is described as a man of love. He is also described as a warrior. He sports a coat of arms and lives at a castle clearing, indicating that he is of high rank. He is introduced on the very first page of the novel.

What is peculiar is that by page 5 no one is hearing about him or from him anymore. Novel readers are cast adrift. Once introduced it would be natural to assume this was a main character, but as it turns out, he does not turn out to be.

Finnegan is introduced within the first two pages. He is described in what amounts to a garbled international language. He is called some kind of meister, after the German term Burgermeister. He is referred to as being of "the Stuttering Hand" which is itself...

More summaries and resources for teaching or studying Finnegans Wake.