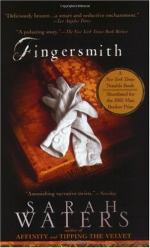 Sarah Waters
This Study Guide consists of approximately 68 pages of chapter summaries, quotes, character analysis, themes, and more - everything you need to sharpen your knowledge of Fingersmith.

This detailed literature summary also contains Topics for Discussion and a Free Quiz on Fingersmith by Sarah Waters.

Sue Trinder, an orphan child of a murderess, raised in the Borough of London by kindly baby farmer Grace Sucksby, has grown up in the company of thieves and fences. Sue is a fingersmith: a pickpocket and petty thief. Wise in the ways of the streets, she has been protected from much of the harshness of that life by the loving Mrs. Sucksby. The first part of the novel is narrated by Sue, from her point of view.

One winter night, a con man called Gentleman comes to Lant Street in search of young Sue. He persuades her to become his accomplice in a scam designed to defraud a young heiress of her fortune and dispose of her by committing her to a madhouse. Despite Sue's feelings that this is a cruel trick to play on someone, particularly an innocent and unsuspecting girl, Sue agrees to her role in the scam for a promised share of the heiress' fortune. She believes this share will change her life and the life of Mrs. Sucksby.

Sue discovers very quickly that Maud Lilly, the heiress, is not as stupid as she has been led to believe. Rather, she is ignorant of many things about life because she has been restricted to the estate where she serves as secretary to her uncle. Sue's role in the scam is to help Gentleman persuade Maud to marry him. Once married and in control of her fortune, Sue is to help Gentleman convince doctors that Maud is mad and have her committed to a women's asylum. As time passes and Sue and Gentleman prepare to woo Maud away from her uncle, Sue discovers that she cares deeply for the kind Maud Lilly.

After all elements of the intricate scam are in place, Sue assists Maud in her escape from Briar and her uncle's control. In the dark of night, a secret marriage is performed, and Gentleman takes his wife and her maid to a small cottage near the church. There, the marriage is consummated and time is spent convincing the woman who has rented them rooms that Maud is mad. After a period of weeks, doctors are brought in to speak with Sue, Maud, Richard, and the woman. The doctors are convinced that Maud is mad. Arrangements are made to deliver Maud to the asylum the next day. The plot twists when they reach the asylum and it is Sue, rather than Maud, who is admitted. The doctors believe that Sue is Maud and that she is suffering from the delusion that she is her maid. This is the first surprising plot twist.

As Part Two begins, the narrative is taken up by Maud and told from her point of view. Raised by the nurses of a madhouse from the time of her mother's death in childbirth, Maud is claimed by her uncle, at the age of ten, and taken to live with him. At Briar, his estate, she is trained to move and speak softly, and to remain on the estate, always under the control of her uncle. Her mornings are spent as her uncle's secretary, reading pornography to the old man to assist him in indexing a bibliography of all pornography. Her afternoons are spent alone or with her maid. After dining with her uncle, she reads to him, and sometimes to other men, as well, from his vast collection of pornographic books.

The handsome and charming Richard Rivers arrives at Briar and brings new life to the dismal estate. He is retained by Maud's uncle, Christopher Lilly, to mount his artwork and organize it into albums. He quickly endears himself to Maud, and persuades her that he can help her to escape her life, claim inheritance, and live a normal life in London. Richard has planned to elope, to get around the legal requirement that Maud have her uncle's permission to marry.

After disgracing and running off her previous maid, Richard sends Sue to be Maud's new maid. Because of Sue's resemblance to Maud, Richard and Maud determine that they will trick Sue into assisting in their plans to win Maud's freedom and to win Richard half of Maud's fortune. Maud pretends innocence and kindness to Sue, as well as love for Richard. Maud, however, grows to love Sue in a way she had not anticipated, and to fear Richard. Her need for freedom overcomes both her love and her fear. The escape and marriage occur. Maud reveals that the marriage is not consummated.

When the doctors arrive, Maud tells them that she is Susan Smith, and that her mistress has become delusional, believing herself to be Sue. With the support of the landlady and Richard, the doctors are convinced that Sue is a deeply deluded Maud. When the carriage arrives at the asylum, Sue protests that she is not Maud Lilly Rivers but Susan Smith. Maud weeps, prays for her deluded mistress, and seals Sue's fate. Richard and Maud begin their journey to London, where Richard has told her they will live in his house.

Upon arrival in London, however, Richard takes Maud to Lant Street, where she becomes the prisoner of the residents of the house. Here, Maud learns that there is yet another plot surrounding both the scheme she developed with Richard and the scheme Richard conceived to lure Sue. Maud learns that Marianne Lilly is not her mother, but Sue's mother. She learns that Mrs. Sucksby has been planning for seventeen years to get Maud, cast off Sue, and claim the Lilly fortune. After trying to escape and returning to Lant Street because she has nowhere else to go, Maud becomes more pliable and agrees to learn to impersonate Sue. Mrs. Sucksby, meanwhile, has decided to stop being a baby farmer, and has sold or given away all of the babies in her care.

In Part Three, the narrative is again told by Sue, from her point of view. She relates the horrors of life and treatment in a Victorian Era madhouse, and her struggles to make the doctors and the brutal nurses believe that she is Susan Smith/Trinder, who cannot read or write. As she begins to succumb to the mind-numbing routine of the asylum, she receives a visit. Young Charles, the knife boy from Briar has been directed to the asylum in search of Richard Rivers, who has promised him a better life as his servant. When, upon arrival, he is told that Mr. Rivers is not there, but Mrs. Rivers is, he asks to see her. Thinking himself visiting a grand hotel, Charles is astonished to see Sue appear as Maud, and more amazed to learn that he is in a women's asylum.

Sue tells Charles the story of what has brought her to the asylum, and persuades him to help her escape, promising him that she will take him to Richard Rivers in London. With Charles' help, Sue escapes the asylum, and the two make their way to London.

Believing that Mrs. Sucksby will be desperately worried about her, Sue longs to return to her home, her substitute mother, and the life she has known. As they watch the house, learning the pattern of Gentleman's comings and goings, Sue discovers that Maud is also in the house, sleeping in her room. Determined to kill Maud for betraying her, she watches for Richard to leave the house. Sue and Charles then go to confront Maud and return to Mrs. Sucksby.

Sue's arrival is met with shock all around. Sue learns immediately that Richard has put the word out in the Borough that she betrayed him and fled with the money. Sue is not able to harm Maud, despite her deeply conflicted emotions. Maud and Mrs. Sucksby try to persuade Sue to leave before Richard returns. Before Sue and Charles can leave, Richard returns.

Before Richard can reveal the true plot, Maud and Mrs. Sucksby rush toward him to silence him. One of them has picked up a knife, and Richard is fatally stabbed. Charles flees the house screaming that there has been a murder, and soon the police arrive. The police find Richard dead and Mrs. Sucksby covered with his blood. They soon discover the bloody knife. Mrs. Sucksby confesses to the murder.

Everyone in the house is arrested. One by one, most are released. Mrs. Sucksby is convicted of murder and hanged. When Sue claims the woman's belongings, she finds the sealed document from Marianne Lilly hidden in the bodice of Mrs. Sucksby's dress. She sees that the document is addressed to her, and pays someone to read it to her. The document reveals the agreement between Marianne Lilly and Grace Sucksby, the exchange of the baby girls, and the disposition of her fortune. It also states that Maud is Mrs. Sucksby's daughter.

Understanding the truth at last, Sue perceives the outlines of the real plot, and her betrayal by Mrs. Sucksby. She also comes to understand that Maud was as much a pawn in the drama of the schemes as she. She concludes that Maud did nothing worse in betraying her than she herself had done in betraying Maud. Admitting the depth of her love for Maud, she sets out to find her. She makes her way back to Briar, despite being told that Maud had gone to France. What she discovers in the house is Maud, herself, working in her uncle's study, writing. Once Maud understands that Sue has not come to kill her, she reveals the contents of her uncle's books and of her own writing. Sue learns that Maud's training has made her adept at writing pornography. Maud confesses that she is writing of her dreams of a life with Sue. Now reconciled, their love for one another confessed, Maud begins to teach Sue to read the stories she writes.

More summaries and resources for teaching or studying Fingersmith.