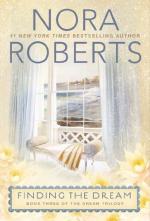 Nora Roberts
This Study Guide consists of approximately 28 pages of chapter summaries, quotes, character analysis, themes, and more - everything you need to sharpen your knowledge of Finding the Dream.

This detailed literature summary also contains Topics for Discussion on Finding the Dream by Nora Roberts.

"Finding the Dream" is the third novel in the Dream series by Nora Roberts. In this third novel, Laura Templeton has finally gotten her life back on solid ground. Laura is working two part-time jobs to replace the money her ex-husband stole and to care for the family home that has become her joy and burden. Just as she thinks she might have found some peace of mind, Michael Fury, a face from the past, comes into her life like an earthquake, reminding her that she is a woman who is more than employee and mother. Unfortunately, just as Laura admits to herself that she might have finally found the soulmate she has always wanted, Michael ends the relationship. "Finding the Dream" is the perfect conclusion to the Dream series, bringing all three friends, Margo, Kate, and Laura together, and the loves they have always dreamed of having.

Laura turns thirty and finds her life wanting. Laura is a divorced mother of two with two part time jobs and a massive house that is her sole responsibility. While she has the support of four amazing friends and a household staff that are more than employees, but family, Laura finds her life lacking. However, after being burned so badly by her ex-husband, Laura is not ready to open herself to the possibility of being hurt again. Therefore, when her brother asks her to allow his childhood friend, Michael Fury, to rent the stables at Templeton House, the last thing on Laura's mind is romance.

Michael is the same as Laura remembers him, a darkly handsome, dangerous man. Michael has quite a reputation, after having been a merchant marine, a race car driver, a mercenary, and a Hollywood stuntman. However, it appears now that he has finally found his calling, raising horses. Michael is incredibly gentle with his horses, a gentleness that seems to extend to Laura's two daughters, Ali and Kayla.

Josh, Laura's brother, talks Michael into taking Laura to a dance one night to keep her from feeling like a third wheel. This arrangement is uncomfortable for both Laura and Michael as they feel unsuited for one another and as though they are both placing the other in an awkward position. However, when Laura's ex shows up and rubs it into her nose that he is engaged to be married, Michael comes to the rescue by helping Laura show everyone she could care less about her ex. This leads to a moment of intimacy between Laura and Michael, allowing him to confess a desire he has had for her since they were both teenagers. Michael makes it clear he would like to make Laura his lover. At first she resists him, but soon finds Michael irresistible.

When the Templeton House housekeeper learns of Laura's affair with Michael, she is outraged because she believes that Michael is a dangerous man who will only hurt Laura in the end. The housekeeper calls Laura's parents, bringing them home unexpectedly from an overseas trip. While also concerned about Laura, Susan, her mother, sets the housekeeper straight on the kind of man Michael really is and takes a sit back and wait attitude. However, Michael himself has never truly believed he could ever be good enough for Laura and he ends the relationship.

The day Michael breaks up with Laura, she goes for a walk alone along the cliff her home overlooks to work through her emotions. While there, an earthquake strikes, causing Laura to fall several feet to a ledge below. Michael comes to her rescue, placing his own life at risk to save her. Then Michael tries to walk away, to leave Laura to her own life, but she convinces him that they are meant to be together and that he is good enough to be her man.

More summaries and resources for teaching or studying Finding the Dream.