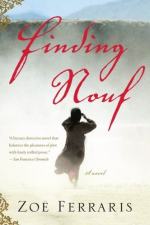 Finding Nouf by Zoe Ferraris won the Los Angeles Times Book Prize winner in 2009 when the book was published. In Finding Nouf, Ferraris explores the tension between men and women in an Islamic nation. The two main characters, Nayir and Katya, an unmarried man and woman, come together in an improbable way to solve a murder mystery of the elite and infamous Shrawi family's daughter.

The novel begins with Nayir in the desert searching for the youngest sister of his dear friend Othman. She has been missing for ten days and is rumored to have run away. Nayir fears the worst - that the desert has killed her. This is confirmed when her body is found in a wadi or an empty lake desert lakebed miles away from Nayir's desert camp. Disappointed and aggrieved that he could not help his friend, he offers to pick up her body from the morgue before the funeral services.

At the morgue, Nayir, a very pious Muslim man, meets Katya, the examiner's assistant and coincidentally Othman's fiancée. Nayir asks to confirm that the body is in fact Nouf and when he sees her it seems as if she hasn't died from the desert heat. The examiner confirms this saying that she drowned and also has blunt-force trauma to the head. Surprisingly, the case is closed and the police are not investigating the possibility that Nouf was murdered.

At the funeral services, Nouf is buried with her back to Mecca and Nayir sees this. This means that Nouf at 16 and unmarried, was pregnant, a crime punishable by death in Islamic law. Later, Nayir receives a phone call from Othman who asks him to assist and lead an investigator into the desert to look for clues and footprints that may indicate what happened to Nouf. Nayir learns that the family does in fact suspect that perhaps she was murdered, or ran away to kill herself, but they paid the coroner's office to close the case to not draw attention to their family's disgrace by her being pregnant.

Othman has also asked Katya to process some samples that she took before the body was released to Nayir. Together, Nayir and Katya begin investigating Nouf's death together. Though highly inappropriate for an unmarried woman and man to spend time together alone, they both remain faithful to their loyalty to Othman, but many of the clues regarding Nouf's disappearance lead back to him.

Nayir and Katya discover that Nouf wanted to escape her family's compound on the island and their way of life. Nouf was engaged and on her honeymoon her husband was taking her to New York. Nouf had planned on running away once she was there. She had paid off an American man in Saudi Arabia to lend her his apartment and help her build a life. Othman, an adopted brother, and Nouf were in love despite the legality of incest. Nouf was pregnant with Othman's baby, but despite Othman not wanting her to run away without him, he did not kill her. Nouf's younger sister, Abir killed her because of her jealously of Nouf's likability and her engagement to Qazi, whom Abir was in love with.

Othman and Katya break off their engagement because Katya realizes that although she and Othman are friends, he does not love her. Nayir realizes now that Othman and Katya are not engaged, that he has romantic feelings for her. However, Katya feels the same way about Nayir.