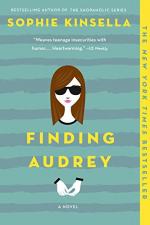 Related Topics
My Not So Perfect Life
Surprise Me

Sophie Kinsella
This Study Guide consists of approximately 57 pages of chapter summaries, quotes, character analysis, themes, and more - everything you need to sharpen your knowledge of Finding Audrey.

The following version of this book was used to create this study guide: Kinsella, Sophie. Finding Audrey. Penguin, 2015.

Audrey is a teenage girl attending high school in the United Kingdom. She suffers from social and general anxiety and depression after being bullied by a large group of girls at her school. Her parents pull her out of school for the remainder of the semester and she must find herself through two weekly therapy sessions and assignments given to her by her psychologist, Dr. Sarah.

In addition to her own turmoil, Audrey's family is falling apart. Convinced that Audrey's brother, Frank, is addicted to video games, their mother halts his addiction the only way she knows how -- by throwing his computer out the window while the neighbors gather to watch the spectacle. All Frank wants to do is compete in an upcoming video game tournament. All his mom wants him to do is suddenly grown an appreciation for classic literature instead of video games. Dad is stuck in the middle, but usually gives in to Mum's demands. Felix is just four, but he likes to repeat swear words he overhears.

In the midst of all the family drama, Audrey happens to fall for her brother's friend, Linus. The feeling is mutual, but Audrey finds it very hard to build a relationship with her fight or flight mentality. Luckily, Linus is patient and wants to help Audrey. Conflict between them grows, however, when Audrey gets too confident in her success and secretly stops taking her medication and goes against her parents' decision for her not to meet one of her former tormentors. Linus does not want Audrey to suffer a setback and he agrees with her parents that seeing the bully might cause a problem.

Linus and her parents were right. Audrey does suffer an anxiety attack after the secret visit to her former classmate. She leaves the house in the early morning hours to walk off the anxiety, but she falls asleep in the park. When her parents discover she is missing, they call the police and begin looking for her. She is found a little later that morning, asleep behind a park tree.

The incident shows Audrey that recovery is a process that cannot be rushed. She also learns the importance of taking her medication as it is prescribed. The incident also shows Mum that life's too short to worry so much about being perfect. She starts serving junk food and learning about video games with the kids. Dad even starts playing games himself. In the end, Audrey is happy to be recuperating without the shield of her sunglasses.She describes eyes as a window into the soul and is happy for people to see her eyes once again.

More summaries and resources for teaching or studying Finding Audrey.