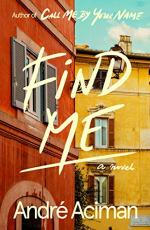 Get Find Me from Amazon.com
View the Study Pack
Study Guide
Order our Find Me Study Guide

André Aciman
This Study Guide consists of approximately 33 pages of chapter summaries, quotes, character analysis, themes, and more - everything you need to sharpen your knowledge of Find Me.

The train symbolizes the often-chance nature of happiness. Sami and Miranda meet on the train by complete chance, which then allows them to form a lasting, deeply fulfilling connection. This idea of chance also relates to Elio and Michel’s relationship.

Miranda’s father’s illness symbolizes the harrowing nature of death. Miranda’s father is very ill, and Miranda fears that he will likely die soon. This fear affects her relationship with her father because she finds it emotionally taxing to spend time with him, to take care of him, and to consider mortality.

Sami’s academic work symbolizes insularity from life and the outside world. At one point in Chapter 1, Miranda half-jokingly comments that Sami focuses more on his work than on life. Sami somewhat agrees with that view, and he feels that his relationship with Miranda gives him true...

More summaries and resources for teaching or studying Find Me.

Find Me from BookRags. (c)2022 BookRags, Inc. All rights reserved.